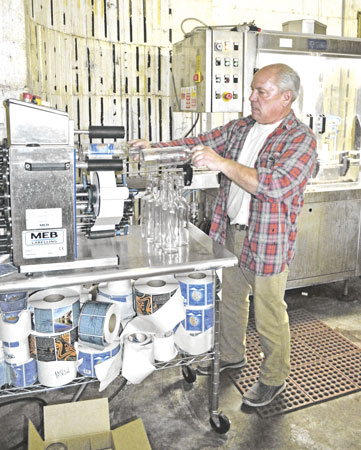 Jim Miller planted Concord grapes simply because he had too much ground to mow. The grapes were ideal for jelly, but when the vines bore more fruit than he needed, he made wine instead.

“We were actually able to drink the wine,” said Miller, adding that the success led him to considering growing more grapes. “That was encouraging. We took time over winter and researched which grapes to grow and where to get vines, and started planting more vines in 1996.” His first commercial plantings included Chardonnay and Cabernet Franc, which still comprise the majority of the vineyard.

At first, Miller grew grapes for other wineries and wasn’t considering his own winery. “After doing that for several years, I realized we were doing all the work and they were having all the fun,” he said. “We started construction of the winery in 2003 and opened in 2004.” Today, Miller grows grapes for his own Moon Dancer Vineyards & Winery in Wrightsville, PA.

Miller immediately set his sights on creating a destination winery. He planned the winery to include a large, below ground production area with ample space for processing. “The winery was a lot bigger than we needed initially,” he said. “Now we’ve grown into it, and at some point, we’ll grow out of that space and need to expand.”

The cellar is 17 feet deep, with the majority of the space below ground. The crush pad is located just outside a large entry door on the north side, providing outdoor access to the cellar. Miller explained the cellar walls are built with Arxx, a hollow foam block filled with concrete. The foam/concrete combination provides an R-value of 50 all the way around the building and is 100 percent waterproof. “It’s a great system for a wine cellar and has worked well for us,” said Miller, adding that it’s still under construction and the walls aren’t finished yet. “It stays at ground temperature year-round, which keeps the wine stable, and it’s energy efficient.”

Since starting the vineyard, Miller has established Chardonnay, Cabernet Franc, Merlot, Shiraz, Pinot Noir and Riesling vines, and plans to add Chambourcin and Sauvignon Blanc. He also purchases grapes and uses juice for the winery’s line of fruit wines.

While Miller handles a lot of the vineyard work himself, he brings in outside help throughout the year. “Pruning and picking are more labor-intensive so I bring in additional help,” he said. “We start pruning in late December and finish by early March.” If sections of the vineyard need to be retrained, Miller brings in experienced vineyard workers.

Miller is also the winemaker at Moon Dancer Winery, and has chosen variable capacity tanks that are easy to clean. “Our annual output is about 12,000 gallons,” he said. “We’re going to expand tank capacity, so we’ll have larger tanks for cold stabilization.”

Like many wineries, Miller started bottling with a manual, six-bottle filler. “I made the mistake of borrowing an automatic corker from a friend of mine and realized how much faster that was,” he said. “The log jam in the bottling line was always the corker, then the bottling line was the problem. We bought a used monoblock filler and that has made a big difference.”

Miller started making cider about three years ago to provide more selection for guests. “There’s been a lot of growth in the cider industry, especially in Pennsylvania,” he said. “I get apples from Adams County where growers have apples available throughout the year. When we have tank space, we can bump up cider production.” One of Miller’s ciders is a hard and hoppy cider that’s dry hopped at the end of fermentation with hops grown on the premises. Cranberry cider and spiced pumpkin cider are fall favorites, and raspberry cider is featured in spring and summer.

While Miller plans to expand cider production, he’ll add more automation first because cider is currently bottled one bottle at a time. A future bottling line will be able to handle wine, ciders and sparkling wines.

When Miller isn’t making wine and cider, he’s handling sales and deliveries. Moon Dancer wines were among the first local wines to be offered in a major area grocery chain. Wines are also distributed to wine and spirit shops through the state’s LCB system.

In keeping with his goal of making Moon Dancer Winery a destination, Miller has added a series of music events. “We start our festival season in May with a jazz festival, then feature blues, reggae, bluegrass and end with a folk festival in fall. We also do charity events and donate a portion of the proceeds. Our main events are ticketed – we sell tickets in advance so we’re prepared for the turnout.”

Guests who attend events usually spend more time at the venue, so Miller followed through with an idea he had – an outdoor, wood-fired pizza oven. “When people are drinking wine, they want food with it,” he said. “It makes this place more of a destination – we have music, food, wine and a view. It took us about three months to build the oven. We had to add one layer at a time because of the dome shape. The oven heats up to about 800 degrees and we can cook a pizza in about two minutes.” The dough is made on site, and Miller grows herbs, tomatoes and peppers during summer for sauce ingredients. Although Miller developed the dough and sauce recipes and enjoys making pizza, employees operate the oven on busy weekends.

Like many destination wineries, Miller relies on social media to announce events. “Our website and Facebook are the two biggest tools,” he said, “but word of mouth is still our best advertising. Almost every weekend, there are people here who drove a few hours to spend the afternoon.”

Moon Dancer Winery entices a wide range of guests, and people bring children, grandparents and everything in between – including dogs. Miller said when the winery opened, he was surprised to see interest in wine among young people. “There are a lot Millenials who are interested in wine, and we’re a good venue for people to bring their friends,” he said. “We have a good following with other ages too. That’s why we do a wide array of music.”

Miller enjoys meeting people and spends time with guests whenever he can. “It’s a great way for me to make friends and meet a lot of interesting people,” he said. “It’s also a great place for others to come and do the same. I like to support agriculture and promote the agritourism aspect of the business. The land could have been developed for housing, but it’s in vineyards.”