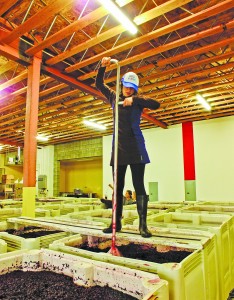 by Sally Colby
Dave Barringer, his wife Jody and their friend Dave Michalec had a crazy idea, and it involved wine.
“We had a mission of cutting America’s divorce rate in half, and wanted it to be serious,” said Barringer. “We wanted couples to shut off their electronics, sit down and spend time with each other — just be with another person.”
The three entrepreneurs had already been making wine at home, and decided to delve into the business. Although the idea for creating a winery came about in 1999, the branding strategy, including wine names, took a while. “We started very small,” said Barringer. “We wanted to make sure the wine we were making was really good. We didn’t want anyone to say there was a technical flaw in anything.”
The initial attention to every detail, from grapes and the wine making process to equipment and marketing, has paid off. In 2002, Naked Winery made a Cabernet and a Merlot — a little over 200 cases of each. In 2003, they made about 200 cases of Chardonnay and all three were released in 2005. This year, Barringer predicts Naked Winery will sell about 25,000 cases.
“We’re happy with that,” he said. “It’s relatively straightforward to grow fast if you want to risk quality, but we can’t afford that. People know what our wine tastes like, so the goal has to be making the best we can make each year.”
At first, Naked Winery focused on making wines that appealed to them. “We started making wine we loved ourselves,” said Barringer. “As we got out there and talked with people, they’d ask if we had anything sweet. We’d recommend different places, then realized that we should start to make sweets.”
In the early years, equipment was sparse. “There was a lot of sharing,” said Barringer. “We worked with friends and had meetings to find out what each of us was planning to buy. Sometimes it was challenging to get the gear in the right place at the right time, and some of the equipment is really expensive, so sharing helped a lot.”
Barringer says one vital piece of equipment is the sterile cartridge filter, which is especially important to make sure there’s no refermentation on the sweet wines. The winery has a manual bottling line, but also use the services of mobile bottler. Cleanliness throughout every aspect of the process, starting with harvest and ending with bottling, is paramount.
Winemakers include Barringer, Michalec and Peter Steinfeld. Naked Winery recently added another young winemaker, Alaina Waller, an Oregon State University graduate. “She comes from a fifth-generation Hood River fruit-growing family,” said Barringer, noting that Waller has good technical knowledge and brings new perspective to the business. “When one of the instruments wasn’t reading correctly, she suggested that deionized water would make the difference. Modern gear requires modern thinking.”
Barringer and his team have a good reputation with growers they purchase grapes from. He noted that the ability to get long-term contracts on high-quality fruit is important. “We’re in close contact with growers, and they visit to sample wine throughout the process, he said. “They want to know what we’re doing with their product. We want to work with growers who care.”
Naked Winery has three wine brands, one of which is bottled in plastic. “It’s class 1 recyclable and BPA-free, so it doesn’t have the funky odor that the old plastics had,” said Barringer. “It has a silk-screen label that’s shaped something like the National Park signs. It’s a wonderful package, and almost impossible to break.” Barringer says customers appreciate a recyclable bottle that’s lightweight and packs easily. The manufacturing process for plastic bottles requires less water, and shipping costs are lower than for glass bottles. Naked Winery’s Outdoor Vino brand, all bottled in plastic with a screw cap, includes Wanderlust White, Rambling Red, Sundress Sweet and Picnic Table Pink.
Reserve wines are bottled in a double-weight, dark bottle with a silk-screened ‘O’. This line concentrates the complex grape flavors including Zinfandel, Barbera, Nebbiolo, Sangiovese and Riesling. Wines of the main brand, Naked Winery, have paper labels with simple yet classic text. Barringer noted that combining carefully selected wines has been popular among customers. “We’ve done well with selling bundles or kits,” he said.
Barringer believes strongly in the team concept for operating a winery. “I think it’s important to spend a lot of time with the team to make sure they’re capable of delivering what we want,” he said. “We hold monthly training, and I love when all the staff is around and actually get to do some winemaking. It means more to them when we do our monthly training if they’ve actually done it before, even if it’s only for a little while.”
Team members also receive as much cross training as possible. Barringer wants those who work in the tasting room to also work outside events so they can understand all aspects of the company. “If you’re talking to one of our guests, you want to paint the correct picture,” he said. “If you’ve worked a day doing shipping, you know what it means.”
Barringer strives to maintain a relaxed, pleasant atmosphere in the Naked Winery tasting room. “We’ve made the rules around wine so difficult that folks are afraid to enjoy what I think is a great beverage,” he said. “We focus on making the tasting room a welcoming, politically safe environment, where staff won’t correct guests who mispronounce wine names. We love to educate, but on their terms, and not demonstrate that we know something that they don’t.”
In addition to wines, the tasting room features several local craft beers and a hard cider on tap, which helps create an inviting environment for all patrons. “People who prefer beer can relax among wine drinkers, and they learn that wine doesn’t have to have so many rules around it,” said Barringer. “No one has to be afraid of holding a wine glass the ‘wrong’ way.”