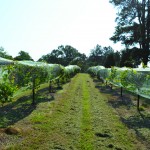 by Sally Colby
Tam Cloer is a horticulturist and second-generation owner in his family’s nursery business, but he knew that one day he’d have a vineyard.
Tam and his wife Pam of Apex, NC, had been growing grapes for about 18 years, mostly as a hobby. Like many other growers, they started their vineyard with vinifera. But Cloer says that he didn’t feel quite right about that selection, and started to research grape growing and visit other grape growers.
“One day, I realized that I was growing the wrong kind of grapes in my vineyard,” he said. “Our latitude, elevation, soil type — all of these factors the French call terroir — when you put the right plant in the right place and manage it the right way, you get a good outcome. When we switched to muscadines, I knew it was the right grape.”
About five years ago, the Cloers removed the vinifera and converted their entire vineyard to muscadine (Vitis rotundifolia). Among the varieties they grow are Noble, Carlos, and Isons; a patented variety from Isons Nursery in Georgia.
Since he switched to the native muscadine, Cloer has gotten far more satisfaction from growing native grapes. Because the muscadine thrives in the humid climate, Cloer doesn’t worry about managing the heavy canopy. He noted that the nighttime humidity, which usually sets in at about midnight and lasts through about 9:00 the next morning, creates the biggest potential challenge. Insect pests are minimal, and Cloer says he doesn’t mind if Japanese beetles defoliate the leaves because it helps reduce some of the foliage.
Cloer just finished pruning in preparation for additional trellis work. “We need to add more support to the trellis,” he said, adding that vines weigh 60 to 80 pounds, with significant foliage weight on top of that. “The muscadine is a heavy producer because it has so much leaf on it. We get a lot of rain and wind here, and we can run into weight issues if the vines aren’t supported.” The Cloers are among the growing number of wine grape growers who keep sheep to help manage vegetation, and use several Katahdin and St. Croix sheep to graze the vineyard area. “They maintain the canopy to head-height,” said Cloer. “They do a nice job of canopy management.”
Grapes at the Cloer Family Vineyard are grown in the Geneva double curtain canopy (GDC), a divided canopy system with a central trunk and four cordons. The GDC system is ideal for large vines, and helps manage the dense canopy of the muscadine by dividing it, allowing more light to reach the fruit.
Although wine grape growing in North Carolina is relatively new, Cloer says that that there are several decades of solid research on growing muscadine. He noted that North Carolina State viticulture extension specialist Dr. Sara Spayd, who spent over 20 years working with wine grape growers on the west coast, brings a wealth of knowledge to the state’s increasingly popular wine grape industry.
Unlike other varieties, the muscadine can be harvested on a somewhat reliable schedule from year to year. When it’s time to harvest grapes, Cloer relies on combination of lab work and tasting grapes on the vine. “pH is a big factor in when to harvest,” said Cloer. “People talk about brix, but in North Carolina, pH is just as important. We have such a humid climate — the pH is such that the grape can go bad quickly in the high 3s, but you can always add sugar. As you get to know your vineyard, the grapes, and your winemaking style, taste goes a long way. Since the muscadine is a native grape, its character is to move toward maturity at pretty much a certain time. Ultimately, wine is made in the vineyard.”
The Cloers harvest six to eight tons/acre each year, but says that there’s a lot of trial and error in developing a viable vineyard and good wine. “When do you rack the wine? How long do you leave it on the lees?” he said. “I’ll leave some of our wines on the lees for 18 months, stir the lees once every month or two and mix it back in the wine to enhance the mouthfeel of the wine. I have a good appreciation for how wine finishes out on the palate — it’s a fascinating process.”
The Cloers’ ‘Noble’ wine is a silver medal winner in the 2010 Mid-Atlantic Southeastern Wine Competition. Their ‘Carlos’, made from the top bronze grape in the United States, is a bronze medal winner in the same competition.
Cloer Vineyards is one of five vineyards on the Heart of North Carolina Wine Trail, which Cloer says is a big help in getting their name out there. “We try to help each other,” he said. “We work together.”
Visit Cloer Family Vineyards on line at www.cloerfamilyvineyards.com.