NC brewer offers something better than beer – water before the hurricane 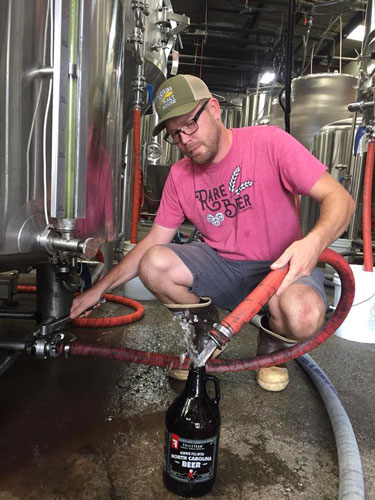 by Courtney Llewellyn
DURHAM, NC – On Tuesday, Sept. 11, Hurricane Florence sat lurking off the Atlantic coast. Carolinians, both North and South, were weighing their options. Should they evacuate? Should they stay and try to weather the storm? More importantly, how could they stay, with food staples and precious water already cleared from store shelves?
That’s where Sean Lilly Wilson, the “chief executive optimist” and founder of Fullsteam Brewery stepped in. The brewery, located about 150 miles from the coast – but in a location that was most likely in the path of evacuating coastal residents – published a post on Facebook that Tuesday before the storm that read “Need water in preparation for the impending storm? We are happy to fill your containers. Enter through Madison Street and introduce yourself to any of our friendly brewery crew. If they’re there – before, during or after the storm – we’ll give you filtered water.”
Fullsteam Brewery has about 25,000 likes on Facebook, so the message was seen (and liked, by more than 1,300 followers).
The brewery’s website states that their mission is to craft distinctly Southern beer that celebrates the farm and food traditions of the American South, and hospitality has long been known as a tenet of Southern culture.
“Our passion at Fullsteam is to connect people to the land and to one another,” Wilson said. “Typically, we think of that in terms of building community, foraging for ingredients or supporting local farms. But when natural (or unnatural) disasters strike, it’s our responsibility to give back to the community…to the people who support us.
“Thankfully, we’re just one of a legion of brewers who think and act this way. I’m thinking of breweries like Oskar Blues, Anheuser Busch and thousands of local breweries like us who would do (and have done) similar things to help those in need.”
The idea to provide the water came from Head Brewer Chais McCurry, according to Wilson.
“For me, the most encouraging part of our gesture is that it came from one of our newest employees,” Wilson said. “We spend a lot of time reflecting on our core values – interviewing and hiring on these values, training on them and making business decisions based on them. That a new hire embodied these values right off the bat is so encouraging to me as a leader.”
North Carolina Governor Roy Cooper told North Carolina residents, “Don’t bet your life on riding out a monster.” Fullsteam Brewery couldn’t slay the dragon…but they could slake the thirst of those who were trying to survive the storm.