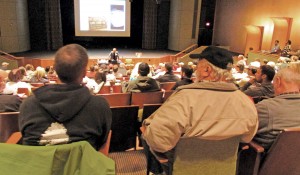 by Pat Malin
MORRISVILLE, NY – Hop growers and enthusiasts could find everything under the sun at the 2015 Cornell Hops Conference & Northeast Hops Association’s annual meeting on Dec. 5 at Morrisville State College. Wherever you have hops, you will have abundant concerns about the weather, diseases and pests, soil conditions, availability of water, differences in crop varieties, harvesting equipment, supplies and brewing to name a few of the wide range of topics on the conference agenda.
The daylong conference, organized by Cornell Cooperative Extension of Madison County, included 350 participants from the hops industry, from brewers, educators, growers, equipment manufacturers and directed at everyone from growers with decades of experience to novices and prospective growers.
The hops and craft brewing industry continues to grow rapidly in New York State and the good news is that the governor’s office, sensing the tourism potential, is encouraging development and even offering some small tax exemptions. “Three million dollars of funding is available through the craft beverage grant program” in the 2015-16 state budget, said Paul Karamanol, a senior attorney with New York State.
Advisories were directed mostly at small contract brewers and retailers, but it even spelled out how not-for-profits and farm breweries can hold wine and beer tastings on their premises. “There haven’t been any changes for not-for-profits,” he said in a later interview. “We’re just trying to clarify that even not-for-profits have to have a permit to serve alcohol. We just wanted to remind the folks.”
He noted, for example, that the state has modified its licensing program. Although liquor licenses for hops growers and sellers of beverages will still be good for 12 months from the date of issue, the expiration date will be changed to the last day of the month.
The other advisories dealt with whether a New York brewery, cidery, pub owner or brewer can operate a brew pub in another state (yes); licensing for seasonal “add” bars; citizenship eligibility for foreign-born brewery owners; the selling of “growlers™”; the sales tax exemption on corks, bottle caps and labels for small brewers (less than 60,000 barrels) and how to qualify for grant money for marketing an alcoholic product. The state is taking applications from November 2015 to November 2016 and awarding grant money from January 2016 to January 2017 to eligible entities.
Anthony Caggiano, a hops grower from Rhinebeck, NY and his partner, Melissa Daniels, had questions for the state attorney on local regulations. “We have a 45-acre nursery and we’re located in an agricultural zone,” Caggiano explained, they are located on Long Island. “We want to start growing barley, but the zoning regulations don’t address beer (breweries). There is no definition of beer as an agricultural product. We wonder if the New York State Department of Agriculture and Markets can inform our town.”
Caggiano, 55, and Daniels 46, have had their nursery for eight years and have been growing perennials, trees and shrubs on Long Island. They also own a 20-acre farm in New Jersey. “My son, Joe, works for the Long Island Brewing Company,” added Caggiano, “and I wanted him to understand the laws.”
Caggiano and Daniels got into the hops business three years ago after seeing their friends start their own home craft breweries. “We were thinking of ways to diversify our nursery in this economy,” said Daniels. “Selling hops is not always lucrative on Long Island where land is at a premium,” she pointed out. “We have learned to make and bag our own soil. We also have a ‘living architecture’ business.”
The hops conference includes an evaluation and sale showcase and it attracted entries from a variety of growers in the Northeast, including Foothill Hops in Madison County, located just a few miles from Morrisville College. Kate Fisher manned a booth that displayed Foothill Hop products, plus accessories like coir (rope) and promoted NeHA membership.
Foothill Hops was started in 2001, making it the second oldest hops farm in the state (at least in the 21st century). “Now there are 250 hop farms in the state,” she said. The Fishers have seven acres of hops and sell their pellets for other home growers, but their business is far more involved than hops production alone. “We run harvesters (for other growers) and will dry and process the hops (in pellet form) on our farm,” Kate said. “We specialize in providing services for small-scale farms.”
Foothill is also a distributer of the rope used to train the vines. “We buy it in bulk from Sri Lanka. We bring in shiploads—90 bales a year (each bale weighs 400 pounds) and then distribute it to NeHA members. We can get a lower price per unit because of the volume.”
NeHA has members in 13 states. Kate Fisher serves on NeHA’s board of directors, while her husband, Larry Fisher, is chair of NeHA’s New York chapter.
Even with its diversification, Foothill Hops isn’t content with its status quo. As Kate noted, “We’re in the process of becoming a farm brewery, hopefully opening next spring. We already buy local grain from Madison County. We will eventually get up to 100 percent New York barley and corn. We want people to come to the farm to enjoy a beer and conversation. We will also have guest taps from other farms.”
Foothill Hops wants to ride craft brewing’s wave of popularity. “Once the breweries recognized that they had a unique product with New York-grown hops and people started asking for more local (food), those two things together led to growth in our industry,” Kate added.