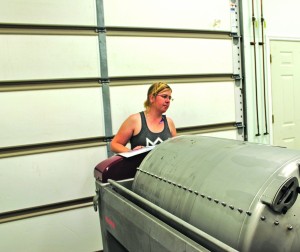 by Karl H. Kazaks
PATRICK SPRINGS, VA — “It’s time to break it in,” said Elsie Stanley.
She stood on the crush pad outside her family’s winery, watching as her husband Nelson and son David performed a few last-minute tweaks to a new CMA crusher-destemmer.
Soon, the machine was processing its first fruit — a batch of estate chardonnay. Berries fell into a Bucher XPro press, stems collected in an adjacent bin.

“It’s working perfectly,” said the winery’s winemaker, Jocelyn Kuzelka, watching to ensure rachis weren’t collecting with the fruit.
David stood on scaffolding, guiding fruit into the destemmer. “I’m glad I don’t have to yell to talk to you anymore,” he said to the family and friends gathered on the crush pad below.
“Our original crusher-destemmer came over on the ark,” Elsie said.
In addition to the new crusher-destemmer, Stanburn Winery has bought three new tanks this year — an 1,100-gallon tank, and 520-gallon tank, and a 260-gallon tank. All of the equipment came from Prospero.
Stanburn Winery started as a commercial vineyard. Nelson and Elsie were looking for a post-retirement occupation and decided on growing grapes for other wineries. They planted their first vines in 1999.
Today they grow about 12 acres of grapes — Traminette, Vidal blanc, Chardonnay, Cabernet Franc and Barbera. They still sell all of those varieties to other wineries, save Barbera, which just came into production last year (the Barbera vines came from Double A). At four acres, Cabernet Franc is their biggest planting.
The Stanleys first made their own wine — 73 cases — in 2009. In 2013, they made about 1,400 cases and this year they expect to produce about 1,400 cases again.
Stanburn makes 11 different wines, using estate fruit and purchased Chambourcin. The lineup includes dry single variety chardonnay, Traminette, Vidal blanc, Chambourcin, Barbera and Cabernet Franc. They also make a dry Cabernet Franc-Chambourcin blend, a sweet Chambourcin, and a rosé. There are also two are off-dry whites. None of the sweet wines are extremely sweet.
The winery buys used oak barrels. The dry whites get barrel time with lees contact and stirring. The goal, said Kuzelka, is for the yeast to influence structure rather than flavor.
With the Traminette, for example, the lees contact “helps carry the fruit in a softer way, adding mid-palate weight,” Kuzelka said.
The winery does use some part-help, but it is mostly a family operation. David works as much as possible, fitting in the winery work around an off-farm job. Nelson and Elsie are immersed in their retirement pursuit — you can often find Elsie mowing and Nelson is in charge of spraying. Everyone helps with leaf pulling and shoot thinning.
This year the Stanburns updated the trellises system for their Traminette, replacing high wire with VSP. The new design provides more shade, thus lowering the risk of sunburned fruit.
Last year, after the wet summer, the Stanley fed their vines with foliar sprays and terrestrial nutrient applications.
As with other small Virginia wineries, attendance at festivals has been a good way for Stanburn to promote its wines. Festivals have “residual effects,” David said — leading not just to day-of sales but also follow-on sales with both consumers and retailers.
The challenge, particularly during harvest season, is to juggle attending as many as three different weekend festivals while managing vineyard and winery operations.
After this year’s first batch of Chardonnay made it into the press, everyone gathered for a sample of free-run juice. They were happy with the result. There was complexity — an assortment of crisp green and ripe yellow apple flavors married with a pleasant top-note expression of fresh-cut hay — and plenty of acidity for structure.
Someone noted that their next investment might have to be a bigger press.
“Maybe next year,” David laughed, looking at the three new tanks waiting to be filled