New, old, and everything in between 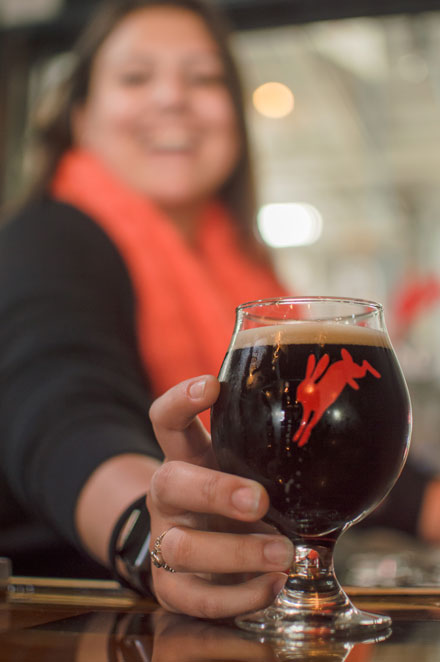 Experimentation is the name of the game for Red Hare Brewing. The brewery is less than a decade old and it continues to try new varieties and collaborations, reaching out across the country.
Photo courtesy of Red Hare Brewing

Red Hare Brewing has come to possess something of a paradoxical position. On the one hand, it is a relatively new brewery; on the other, it is seen as a granddaddy amongst craft breweries in Georgia, one of the Peach State’s craft brewing’s founding fathers.

“We’re not even ten years old yet,” explained Olivia Caldas, Red Hare’s manager of marketing and taproom events. “We began operations in 2011. We commemorated our eighth anniversary in April. But at the same time, we’re one of the first five craft breweries throughout the state, the first in Marietta, and in 2012 we became the first brewery in Georgia to can our beer.” She added, “While there hasn’t been a craft brewery presence in the state very long, we’ve been here the whole time!”

In that time, Red Hare has gone from distributing its beers from the greater Marietta area to all of Georgia to a clientele today that can boast locations throughout Florida, Alabama, Tennessee, North Carolina and South Carolina.

That expansion shows no signs of stopping. Caldas is quick to point out, “We just celebrated the one year anniversary of our second brewhouse location in Shallotte, North Carolina.” Officially named Red Hare Brewing 34° North, a nod to the brewery’s latitude, “We call that location our ‘experimentation station.’ It’s where we can go a little off script and try our hand at some funky brews, some open fermentations. We’ve been trying a lot with barrel aging there.”

Asked what Red Hare has been working on, Caldas has no shortage of answers at the ready. “At our main location, we’ve got our two core lagers, three IPAs, and two radlers, which I describe as half beer, half soda. They’re very popular.”

And at Red Hare’s “experimentation station”?

“There we’ve been working on sours – krieks and lambics. A lot of experimentation with a type of fruited, sour beers. Our North Carolina location is also producing a line of non-alcoholic craft sodas. Right now we’ve got a really great craft root beer and a tasty grapefruit soda. They’re made using locally sourced cane sugar,” Caldas said.

A hallmark of cutting edge craft brewing has been collaboration. By teaming up with other enterprises, breweries are able to pair their beers with other elements to create “an experience rather than just another beer,” according to Caldas. Red Hare has leapt in headfirst.

“We’ve had a lot of success with our collaborations. In the past, we’ve had our Hoptimistic Hare,” she said. This was an IPA brewed to pair with local Atlanta restaurant The Optimist’s seaside fish camp experience. Current collaborations include Barrel Aged Gangway IPA, a collaboration with Jose Cuervo to produce an IPA aged in tequila barrels. Ill Tempered Hare, which Red Hare has made in conjunction with Oakshire Brewery of Oregon, is a summer version of that brewery’s Ill Tempered Gnome Winter Ale. A marriage between Red Hare and Atlanta’s Holeman and Finch Public House produced National Common. The first beer in Red Hare’s “Chef Series,” the idea was to create a beer to pair with the Holeman and Finch’s burger that was a fresh take on an American turn of the century-style California Common. “It pays homage to a simpler time – three grains, two hops, one burger,” Caldas explained.

The most recent collaboration Red Hare has undertaken is with Peach State Speed Date, a popular local dating service. Infusing their brew with lactose, Red Hare has created its Peach State Pale Ale. “It has a light and sweet peaches and cream taste to it,” said Caldas. According to Red Hare, it’s “the perfect source of liquid courage to lubricate the lumbering lovelorn.”

Always looking ahead, Red Hare is continuously trying something new. Caldas summed it up nicely: “We’ll keep trying new stuff as long as people keep responding well to it!”