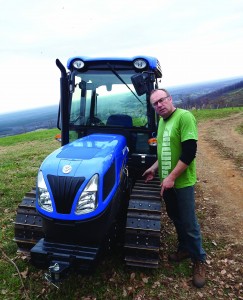 by Jon M. Casey
It has been a long time coming, but the expansion of the vineyard at Thomas Jefferson’s Monticello near Charlottesville, VA is currently underway with the addition of approximately three acres of Pinot Noir grape vines at Montalto, a 482-acre property previously known as Brown’s Mountain, a parcel once purchased by Jefferson in1777. Following Jefferson’s death and the passing of the property to his heirs, the property was sold and bought several times over the years. In the early 1900s, a dwelling was built on the site by then-owner James Addison Patterson. The house was given the distinctive name, “Repose.” Following Patterson’s death in 1931, the property changed hands several times and has since been used for various purposes including residential rental units and a visitor’s attraction. Ultimately, the Thomas Jefferson Foundation acquired the property, returning it to its original name, Montalto.
In 2011, the foundation restored the property’s 11,000 sq. ft. house, which now hosts academic conferences and is available for private functions. There, visitors are able to enjoy the facility for lectures, dinners or receptions. Following the restoration in 2012, they added the new, six-acre vineyard site where they planted three acres of vines on the southern face of the property.
Gabriele Rausse, director of gardens and grounds for Monticello, welcomed us at the Thomas Jefferson Visitor Center and Smith Education Center. There, he introduced us to Oliver Asberger, the veteran winery and vineyard manager who is responsible for the vineyard atop Montalto. Asberger escorted us from Monticello, up the 410-ft. incline to the vineyard where we had a breathtaking view of the valley including the familiar Monticello grounds to the east. At Montalto’s vineyard, the terraced trellises of vines gave us a better understanding of the challenges that the steep incline of Brown’s Mountain offers Asberger and his crew.
Rausse explained that initially, they were relying upon conventional equipment to meet their needs for cultivation, spraying and maintenance of the vineyard. However, as time passed, they saw the need for a tractor that was more like those in use in Italy. That was when he made the decision to purchase a crawler-style tractor designed for the wine and grape growing industry, commonly in use on similar terrain in his original homeland.
He said he had owned and operated a crawler-style tractor here in the U.S. for many years at other vineyards in central Virginia. He recalled how in 1976, he purchased a Massey Ferguson crawler-style tractor for a central Virginia vineyard, because it was made in Italy, but had an American brand name for sale in the United Kingdom and in the U.S. Now, once again, he wanted a crawler-style tractor with steel tracks. What he found was the New Holland TK4050, a model that filled that need.
As we toured the vineyard, Asberger said the new tractor is much safer to operate on this kind of terrain because its low center of gravity allows for easier turning at the end of the vine rows, where the surface goes from level to sloped and back again. “When you turn around at the ends of the rows, there is much better traction,” he said. “Even when the ground is wet, there is little slipping or sliding.”
Rausse said using a crawler-style tractor in wet conditions following rains is very important because of the short window of opportunity the growers have to spray for Black Rot and Downy mildew. More importantly, with the potential for vine root damage in the soft ground under the area where the wheels of conventional tractors travel, the need for a tracked unit becomes extremely valuable. With fewer pounds per square foot of pressure from the tracked equipment, the vines stay healthier and the operator is able to work more safely.
Asberger said the new crawler was specifically purchased for the Montalto property. When he is not using it to tend to the grapes, he is able to mow with it on pastureland that was previously inaccessible with a conventional tractor and mower. He said he is able to keep it looking at its best for the visiting public.
Asberger noted the New Holland tractor is designed to operate without the need for a clutch. That adds to the safety factor when pulling equipment that can tend to be top-heavy, like sprayers or water tanks. He said because there is no clutch, the operator can focus their attention on controlling the equipment more effectively, using the joystick and lever controls. He said that as a common practice, whenever possible, he lowers whatever equipment he is towing behind the tractor to its lowest position at the ends of the rows to enhance the safety of making the 180-degree turns.
Back at the Monticello Grounds and Gardens maintenance facility, Rausse said he is looking forward to next year’s harvest of grapes from the Montalto Vineyard. He said he would be turning them into wine in his own winery, located in the basement of his home a few miles from Monticello. Rausse, who has earned a reputation as the “Father of the Virginia Wine Industry,” currently is the vintner of the Monticello grapes. He also purchases grapes from nearby vineyards to create his own branded label brand of wine selections, sold in the gift shops at the Monticello Visitor Center, Monticello and local Virginia wine outlets.
The new Monticello wine from the Montalto-grown grapes will be labeled with the established Monticello label, however. In the past, the small batches of wine from the grapes harvested at the vineyard behind Monticello has been in great demand, usually selling out in the first or second day of its announcement. He said with the increased harvest yield, they would be able to offer true Monticello wine to more people. That makes Rausse a happy man.
For more information on Monticello, visit the foundation’s website at Monticello.org