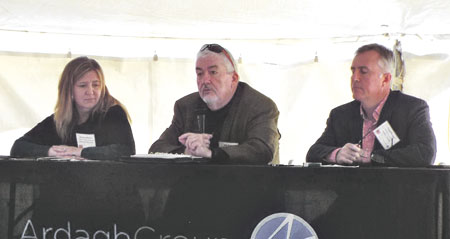 In March the North Carolina Craft Brewers Guild teamed with the Ardagh Group to present a sustainable brewing and packaging workshop on the grounds of the Ardagh glass manufacturing plant in Wilson, NC. Panels from local and national craft breweries joined with recycling representatives and the North Carolina Department of Environmental Quality (NCDEQ) to give brewers insight into the development of their own sustainability and recycling programs.

Craft breweries and sustainable production are already natural partners. “Everyone goes to a local craft brewery to have a good time, but there is a mentality with you guys about sustainability and being a model for change in your communities,” said Wendy Worley, recycling and materials management section chief with the NCDEQ. When this mentality combines with a need to control energy costs and comply with state regulations, sustainability becomes a logical step in any business plan. But sustainable practices are not always easy or inexpensive for small brewers to implement.

“You have to go beyond the warm and fuzzy feeling about sustainability,” said Kate Binder, sustainability specialist for Bell’s Brewery of Kalamazoo, MI, the seventh largest craft brewery in the U.S. “Everything we do in our sustainability department has a business case and a return on investment. Identify the projects that will have the greatest impact for you.” Binder suggested looking at utility usage as a place to start and recommended placing all utilities on spreadsheets to monitor changes.

Since 2008, North Carolina law has required bars and restaurants with a liquor license to recycle all beverage containers, including glass, aluminum, plastic and steel. This means that recycling is essential for many breweries, but complying with the mandate can be complicated by the lack of facilities and service providers, especially in rural counties. Worley encouraged small brewers to contact the NCDEQ to help find providers to consolidate recycling for pick-up. She encouraged forming partnerships with other businesses to reduce costs for dumpsters, balers and service. “Never underestimate the value of networking with others in your industry,” said Chad Beane, solid waste manager for Moore County Public Works. Moore County, NC, is home to the resort communities of Pinehurst and Southern Pines and became a model for municipal recycling by forging new partnerships after a former vendor terminated the county’s contract.

Mike Greene, business development specialist for the North Carolina Division of Environmental Assistance, addressed the growing concern of China’s role in American recycling. “When markets are down, businesses have to pay to recycle, not get paid to recycle,” he explained. “Currently China, the largest processor of American recycling, is only accepting ‘clean’ waste, which means no more mixed plastic or mixed paper loads,” Greene said. Since many counties focus on single-stream recycling, this may create a problem of finding processors for local waste in the future. The immediate solution is separating recyclables in dedicated bins and partnering with others to make pick-up more cost efficient.

Many questions were related to sustainable features that could be built into a brewery. Josh Brewer, brewmaster of Mother Earth Brewing in Kinston, NC, described some of the features and practices that earned Mother Earth the honor of being one of the first LEED Gold certified breweries in the United States.

“With a name like Mother Earth Brewing, you’re expected to walk the walk,” Brewer said. Mother Earth Brewing began its sustainable journey by revitalizing a historic building in downtown Kinston and insulating its walls with 100 percent recycled denim fiber and spraying the ceilings with a soy-based foam. A six-kilowatt solar array is used to power the taproom and solar hot water is used in the pilot brewery. Tankless hot water heaters are used for keg washing and serve pilot room applications. Gray water is pumped into toilets instead of fresh water and a newly installed 2,500-gallon cistern collects rainwater for use in landscape plantings. The sustainable attitude extends to the organic hops that Mother Earth uses on its pilot batches and cask conditioned beers. Organic malt is also used whenever possible and all spent grain is feed to local livestock. These green initiatives each have an economic effect on the brewery’s bottom line and even small changes can make a difference.

“We saved a lot simply by reducing the temperature of our sparge water by four to five degrees,” said Brewer.

When the panel was asked what they considered the greatest challenge in implementing sustainable practices, the unanimous answer was employees. Employees easily become complacent and may shortcut protocols for the sake of time. Involving employees in identifying and creating the sustainable initiatives can help. Binder said that Bell’s Brewery program began when an employee noticed that cardboard was being placed in mixed recycling instead of being separated. “That effort snowballed into the sustainability department that we have today,” Binder said.

Even small breweries can benefit from sustainable practices. “We are very small, so it is easy to see waste in the plant,” said Larry Lane of Double Barley Brewery in Smithfield, NC. “It’s in our best interest to minimize anything going out the door.”