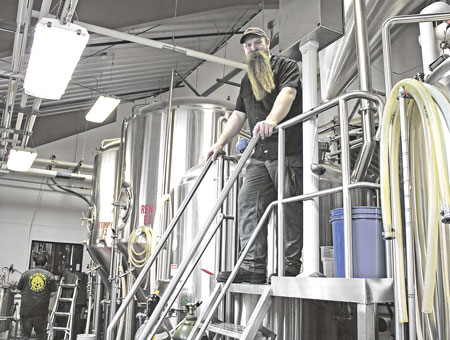 When Chris Morley sat down to think about the brewery he wanted to open in Brewer, Maine, he knew it would need to have enough of a draw to bring people that far north.

“The concept was to make a craft beer destination,” said Morley, who has had past careers in banking and law enforcement. He found that destination in a property along the Penobscot River, looking out across the city of Bangor and Darling’s Waterfront Pavilion, a popular open-air amphitheater with a 15,000-person capacity.

The region has seen a revitalization in recent years, beginning in 2002 when it hosted the National Folk Festival. The city’s desire to continue the event by creating the American Folk Festival, now held in the city annually, has led to significant development of businesses and infrastructure along the scenic waterfront.

With prime views of the concert venue from the 300-seat brewpub, including a dog-friendly 170-seat patio, Mason’s Brewing Company opened in May 2016. It was the largest start-up brewery to open in the state based on barrel size, and they’ve been growing ever since. That first year they brewed 900 barrels and more than doubled that the next year, hitting their capacity of 3,800 this year.

“We’re going into year two and sitting down to plot out expansion,” said Morley. They hoped to break ground this autumn on a new production facility with a nearly 8,000-barrel capacity to fill their distribution demands in four states.

Another boon for business is that the brewery is just off the exit of the major highway to Acadia National Park, a popular summer tourist destination and one of the nation’s most visited parks.

Opening Mason’s Brewing Company was also about showcasing the styles of beers Morley fell in love with on his travels with his wife to beer hotspots like Belgium, Germany, Switzerland, San Francisco and Colorado.

He bumped into Mason’s now-brewmaster Forrest Brown by chance while Brown was returning to school for microbiology at the University of Maine. A homebrewer with professional experience at Bangor’s Geaghan Brothers Brewing Co., he was enrolled in a pilot brewing project at UMaine. “I kidnapped him,” joked Morley.

The two worked on recipes together for a year and a half, ending with an equal mix of German, Belgian and American styles for the brewery’s tap list. “It’s a nice little portfolio of beers,” Morley said. “If you’re not really into hops, we have saison, three or four different German styles on and a couple others. We’re just revamping. Due to demand, we’re expanding our IPA portfolio.” 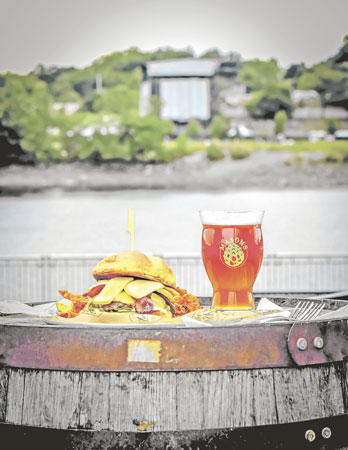 Hipster Apocalypse IPA is their most popular. “It’s probably our flagship beer,” said Morley. “It’s the one that we’re known for and the beer that gets the most traction.” He noted that part of its popularity is due to the can art, which has gotten a large following since starting the apocalypse-themed project with Ghost Reaper, a double dry-hopped IPA brewed with ghost peppers, followed by IV Norsemen, a collaboration with Biddeford’s Banded Horn Brewing Company, then Hipster Apocalypse, a hazy New England-style IPA.

The can artwork was created by Portland-based comic book artist Ben Bishop, most well-known for his comic cover art of Teenage Mutant Ninja Turtles and Batman, whom Morley met through a mutual friend.

“Part of the success of the company is that I’ve been able to find the right key people where I don’t have the skills,” Morley said. “I’ll make a mock up [of the can] and we’ll talk over the phone, then he executes it and exceeds my expectations.

“I’ve been fortunate. Not a lot of cans out there look like that yet, at least in this region. Good brewing is always the driving force, but you have to set yourself apart since shelf space is becoming smaller and smaller,” he said.

The restaurant side of the brewpub is also contributing to their success. “On the flipside, we’re more known for the quality of food that we’re turning out,” said Morley, who employs 36 year-round staff that swell to 48 in the summer.

“I don’t know what it would be, to be honest – an old school infusion of eclectic burgers and pizzas, stuff you’d find [on the West Coast], but not here. Maine trails about six or seven years behind the rest of the country.” He noted Portland, Maine’s largest city, has long been seen as a food mecca, but the Bangor/Brewer region, called Northern Maine by most (but actually sitting in the state’s center) is still catching up.

“It’s been neat to be a part of that and watch others,” Morley said of the region’s revitalization and growing food and craft beverage scene. “I’m the kind of guy who had no business in the business and yet it seems to be working. It’s kind of funny. I literally have no brewing and restaurant experience or experience managing a company but I think that’s what’s unique about it. I have no preconceived ideas. I look at what do I want when I go into these places… It’s been an interesting ride for sure.”