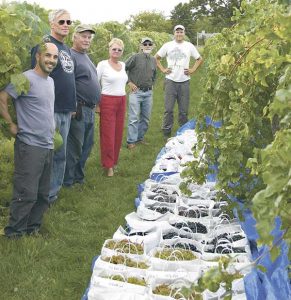 WILLSBORO, NY – The cold hardy grape variety research nursery in northern New York is getting a make-over.
With new funding from the farmer-driven northern New York Agricultural Development Program that helped establish the nursery at the Cornell Willsboro Research Farm in Willsboro in 2005, old vines have been removed, the soil is being refreshed, and new varieties of grapes have been carefully selected for planting in 2017.
The evaluation of new varieties has been named a priority by growers associated by the wine grape industry across NYS.
A list of 21 potential varieties for the new planting at the Willsboro farm was identified through a survey of Northern New York grape growers, the leaders of the highly respected Cornell-Geneva and Minnesota University grape breeding programs, and private grape breeders. Cornell University Horticulture Professor Tim Martinson and Anna Wallis of the Eastern New York Commercial Horticulture Program will determine the final planting based on the availability of plant material in the spring of 2017.
In 2015, the old vines at the Willsboro were removed with the exception of the Marquette, Frontenac, Frontenac gris, and La Crescent varieties that have proven to be suited to the NNY climate and soils. Those plantings continue to produce grapes for wine production research by Cornell University.
Regional growers will be invited to help establish the new planting. Once the new trial is planted, the research team will evaluate such factors as vine vigor, winter survival, crop yield and grape quality.
The results of past cold hardy grape trials conducted in Northern New York are posted on the Northern New York Agricultural Development Program website at www.nnyagdev.org .
The farmer-driven Northern New York Agricultural Development Program provides grants for on-farm research and technical assistance projects in Clinton, Essex, Franklin, Jefferson, Lewis and St. Lawrence counties. Funding for the Northern New York Agricultural Development Program is supported by the New York State Senate and administered through the New York State Department of Agriculture and Markets.