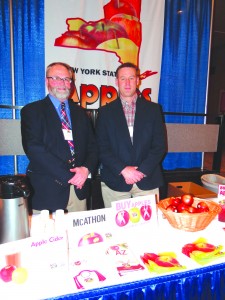 by Elizabeth A. Tomlin
New York State grape growers, wine producers and craft beverage producers joined forces at the NY Farm Bureau 2015 Taste of NY Legislative Reception in Albany to educate, entertain and question New York legislative members. “We’re working on the ‘Wine Pledge’ right now to get all of the New York legislators to support New York wines at all of their functions,” said New York Wine Industry Association Vice President Susan Hayes while she was serving samples of a variety of wines from the Finger Lakes region.

Louis Gridley, Secretary and Treasurer of the NYS Wine Grape Growers, Inc., voiced his concern about wine not being as available in grocery stores. “The wines are in the liquor stores and a lot of people don’t get a chance to get in there to buy it,” Gridley commented. “We have a very closed market,” agreed Hayes. “We’d love a more open market.” Donna Gridley, representative for Women for NYS Wine, informed folks about what their group does to promote New York’s wine industry.
“Women for New York State Wines is the educational and promotional arm of the New York State Wine Grape Growers Association,” she said. Wine Grape Growers has been active for over 50 years, while Women for NYS Wines has been in existence for over 30 years.
Tom Frey, joined by folks from Rulf’s Orchards, served hard cider, while informing attendees about the Adirondack Cider Company and the part that orchards play in the Adirondack craft brewery movement.
He noted that on Aug. 1 the Adirondack Coast Visitors Bureau would host a celebration in Plattsburgh promoting the craft brewing industry. “We may start to brew beer in a few years,” he remarked. “So, we’re also going to start looking to do a beer trail.”
New York Apple Association President Jim Allen spoke about the promotion of the apple industry and the recent cider movement. “We promote apple cider for the state and we’re starting to work very closely with the cider industry that’s merging with the hard cider industry,” Allen stated. “There’s great new opportunity statewide.” The New York Apple Association’s website lists hard cider producers throughout the state. Otter Creek Winery owner Kyle Hafemann in Jefferson County, says the wine business is a great business to be in at this time. “You’re going to see a lot of growth in the wine, beer and cider industries right now.”