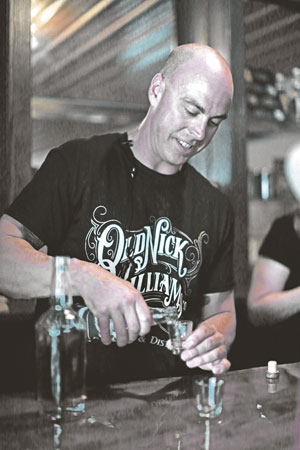 by Laura Rodley
The shutters are wide open again at Old Nick Williams Company Farm and Distillery and the aroma is delicious. The distillery was shuttered in 1919 due to prohibition.
Just shy of a century later, they reopened on Father’s Day in June 2017. Five hundred people showed up on opening day at the distillery set on the site of the original barrel warehouse in Lewisville, NC. On March 2, 2018, they began their own brand of distilling history, by mixing the distillery’s first rum mash.
Zeb Williams is a fifth generation distiller, proud to be producing the whiskey that Joseph Williams, his great-great-great-great-great-granddad did when he first opened the distillery in 1768.
They produce a white whiskey, Old Nick Carolina Whiskey, made with locally sourced corn, wheat and malted barley. They also produce Old Nick Carolina Bourbon.
“Right now we’re trying to fill four barrels a week,” said Williams, utilizing one 250 gallon traditional hybrid pot – half stainless steel and half copper – and two additional 100 gallon thumpers in the 5,000 square foot distillery.
They expect to turn out the rum within 60 days. Jamaican rum is traditionally made “with cane juice, but we can’t get cane juice where we are – the bacteria gets into it when it’s fresh – so we use white sugar, brown sugar and blackstrap molasses,” said Williams, “and dreams.”
“It’s fantastic. Most kids want to grow up to be a pro athlete. I grew up wanting to be in the whiskey business,” said Williams. Bringing back to life all the stories of his youth “is surreal.”
Joseph Williams, who started the business, had been a colonel under George Washington, so he was locally known as Colonel Williams. He started the farm on the property in 1765.
In 1847, a farm visitor to the farm was former President James K. Polk. In 1860, James Buchanan expressed thanks for a delivery of a keg of whiskey, attesting to its excellence.
The distillery was passed down, father to son, father to son, father to son. In 1909, laws changed and they had to stop production and only sell outside the boundary lines of North Carolina. “We were forced to stop selling in North Carolina in 1910,” said Williams.
When the 18th Amendment, which declared the production, sale and transportation of alcohol to be illegal, was followed by Prohibition, the business was shuttered in 1919. In 1920, prohibition revenuers came and destroyed the 28,000 gallons of whiskey still on the property.
Zeb Williams and his cousin, Matt Williams, caught the distilling fever and fanned the flames of tradition towards Zeb’s father, Van Williams, and his uncle John Williams, who were both retired. “Each of us have dreamed about it all, hearing the stories all the time we grew up. It was me and my cousin pushing it.”
To get ready, Williams starting learning with another distiller in 2014, as distilling was not a skill he learned growing up, as it had been for his ancestors. Meanwhile, he worked full-time at his own mobile advertising company, Ad Runner, which he still does, as well as work in the distillery full-time. His cousin works as a flight paramedic for North Carolina Baptist Hospital. Williams and his father spend the most time at the distillery.
“My father and I have more time to be together. That’s probably what I like most of all – working with my father, being back on the farm, the camaraderie of working together. That’s the first and most awesome thing,” said Williams.
The second is the science of it, the challenges of how to produce more alcohol yield from each batch, and the fermentation process. “It’s a constant learning curve. I’m one that loves a constant challenge and every day this business throws another challenge at you,” said Williams.
The distillery sits on 23 acres. They have been growing corn on their 800 to 1,000 acre property for the last 150 years. For the last 10 to 20 years, another farmer has been growing corn on their fields using genetically modified seeds, “bred to resist certain diseases and be more drought resistant.”
As they use only non-GMO grains and heirloom varieties of corn in their whiskey production, he wants to switch over to growing all non-GMO corn on their property within the next two years. He wants to grow “something true to what they used in the old days,” and be able to produce their whiskey “grain to glass,” like his ancestors did.
“I’m hoping to have 200 to 300 acres planted in corn. My intention is to have a side grain business, supplying corn, wheat, rye and malted barley.”
For him, it’s not just a field of dreams, it’s a field of dreams becoming reality. His ancestors, a whole line of fathers and sons, might just walk out of the corn, as in the classic movie “Field of Dreams,” to come toward their distillery, to thank him and his family for bringing their distillery back to life.
The tasting room is open Thursday through Saturday. Typically 20 to 50 people drop by the tasting room. Nice spring days see less traffic, but rainy days bring crowds to the sweet smelling distillery.
For more information, access www.oldnickwilliams.com .