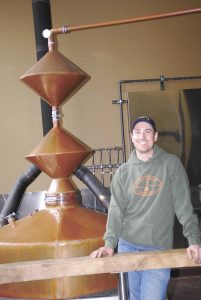 by Jane Primerano
On the end of Main Street that leaves the bustling capital district of Madison, WI and enters the old industrial part of town is the Old Sugar Distillery.
In many ways, the rambling, ancient factory buildings are perfect for the artisan spirits business. Old Sugar has a 2,000 square-foot warehouse full of barrels, as well as the rustic-looking tasting room with a bar made from reclaimed wood dating from the 1800s, and extra seating.
Nathan Greenawalt was most interested in aged spirits, so the neighborhood and the building were perfect for him. Noting the building is one block off the city bike path, he said in nice weather he will have 20 bicycles parked out front. In addition, many customers walk to the distillery and the wide sidewalk accommodates outdoor seating as well.
In the main room at Old Sugar Greenawalt installed his 50-gallon still made by employee Matt Peters and also has two smaller stills he uses when necessary.
Greenawalt worked in a wine and hops shop after college and started doing some home brewing. He bought a small still seven or eight years ago.
“I thought about graduate school or teaching,” the former economics major said, but he succumbed to the lure of making aged spirits. His wife, Courtney, is a teacher, currently on leave to care for their little son, Cooper.
He acknowledged most people start with clear spirits because they don’t want to wait to have product for sale, but, he noted, “a lot of people are selling sub-par clear spirits.”
Greenawalt uses a modified pot still that is not suited for vodka or gin.
His first product was his Old Sugar Factory Honey Liqueur, named for the Nineteenth Century sugar factory, which was next to his location. He describes it as distilled from Midwestern-grown dark brown beet sugar and sweetened with Wisconsin honey. It is not finely filtered because that keeps the flavor.
Soon after creating the honey liqueur, Greenawalt created Cane & Abe Small-Barrel Rum. Abe was the bald eagle mascot of the Wisconsin unit that fought in the Civil War. The bird is immortalized in a large photo on the tasting room wall. Cane & Abe is an unsweetened golden rum made from domestically-grown dark brown cane sugar and aged in a blend of new and used heavily charred small American oak barrels. This contributes to its smoothness.
“Making an oaky rum was an early passion of mine,” Greenawalt said, adding, “This is a whiskey-drinkers rum. I believe in simple recipes.”
“The rum was our flagship product,” Greenawalt said. “Now it’s the sorghum whiskey.”
The Queen Jennie Sorghum Whiskey recently won an American Distilling Institute silver medal. It’s made from 100 percent Wisconsin sorghum and aged in charred oak barrels.
Queen Jennie was Madison’s “Queen of the Bootleggers.” Jennie Justo started a “student speakeasy” for the University of Wisconsin students in an Italian neighborhood in Madison during Prohibition. Her real name was Vinzenzia DiGilomo and she served a year in jail when the speakeasy was raided.
The final of Greenawalt’s mainstay liquors is Americanaki Ouzo, with the licorice flavor of Sambuca, anisette and other ethnic cordials. It is twice distilled and twice infused with star anise to make it as smooth as possible.
Greenawalt also produces four limited release spirits.
One of these is Brandy Station, a traditional brandy made from local grapes. The brandy is aged in new medium-toast barrels, which give the drink a hint of vanilla. It is then moved to used, charred rum barrels to pick up caramel flavors. There is a fairly high demand for brandy, but its cost keeps it from being one of the top sellers.
Old Sugar’s grappa is called Grappa!, an accurate name considering grappa’s notorious kick. Greenawalt’s grappa is an un-aged brandy made from the skins and stems of grapes and has an earthy flavor.
Another limited-release drink is brandy-barrel aged rum, a version of Cane & Abe aged in the used medium-toast brandy barrels to infuse a light vanilla flavor without the intense caramel notes of the signature Cane & Abe.
“I wanted to make a light rum for summer cocktails,” Greenawalt said. He explained because it is not aged in charred oak, it doesn’t get as much color as his main rum. Except for the aging, it is made the same way as Cane & Abe.
The final limited release spirit is Mitchell Concord Liqueur, distilled from Dane County concord grapes and midwestern beet sugar. It is aged in toasted barrels and sweetened with local Concord juice. The grapes come from a vineyard owned by Dave Mitchell.
“People think concord is a sweet grape, but it doesn’t ferment out to more than 8 or 9 percent,” Greenawalt said.
To familiarize customers with the unique spirits, Greenawalt offers several cocktails.
For the Honey-Cap, Greenawalt adds more honey and lime to the Old Sugar Factory Honey Liqueur. The Gringo is also made with Honey Liqueur, this time mixed with rice milk and topped with grated cinnamon and nutmeg, for sale only around the holidays. Old Sugar’s version of a Cuba Libre is made with Mexican Coke, which is blended with pure cane sugar.
In Wisconsin, an Old Fashioned is traditionally made with brandy, but Greenawalt offers customers the choice of spirits. He even has a twist on his Dark and Stormy by muddling the lime. A Whiskey Ginger has muddled orange, lime and bitters with Queen Jennie and ginger beer. A Nessalla Old Fashioned blends locally made Raspberry Kombucha, bitters and Concord Liqueur. Nessalla, he explained, is a local fermented tea, not necessarily alcoholic, that can be flavored with fruits or herbs. The Harvester features Door County Cherries, local apple cider and Queen Jennie served over a giant ice cube and orange mist.
Despite recent renovations to the tasting room he is still keeping the quaint, old-fashioned charm of Old Sugar and Greenawalt is always thinking of more innovative products for his customers.