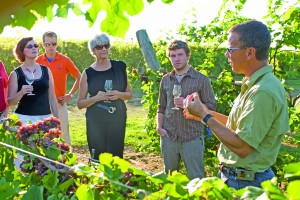 by Karl H. Kazaks
Paying close attention to every detail of the customer experience, and how those details add up to make an impression on consumers, has been a key reason for the success of Oliver Winery, the largest winery in Indiana and one of the largest in the Eastern U.S.
“We want to run a really great winery,” said Bill Oliver, the winery’s president.
First and foremost is the product in the bottle: Oliver makes fresh, clean and approachable wines, from hybrid and vinifera varieties as well as fruit wine, cider and mead.
“We make everything from barrel fermented Chardonnay to blackberry wine,” Oliver said, “from a 70 dollar Cabernet to an eight dollar Concord.”
The winery makes two dozen dry wines, six semi-dry wines, over a dozen semi-sweet wines (including some mead and fruit wines), plus cider, sparkling wine and dessert wine.
“You’ve got to have a rainbow of wines to be successful in the carryout trade,” said Bill Oliver.
And Oliver has been successful in the carryout trade, selling some 30,000 cases of its 320,000 case annual production from the tasting room floor.
Oliver is able to sell that many cases from its winery not just because of the quality in the bottle but also because of the attention that has been spent on the winery environment.
“Here’s my secret,” said Oliver. “I make the place beautiful.”
It starts outside, where there are several landscaped acres, with numerous water features and gardens, tended to by a full-time, four-person grounds crew.
That hasn’t gone unnoticed by consumers. On Yelp, one reviewer wrote, “The grounds are beautiful. The flowers and water features make the whole place relaxing.”
That mood is exactly what Oliver is after — and the feel extends inside to the tasting room.
“We want the tasting room to be a place you want to hang out in,” Oliver said. “Our mission is to provide a great, comfortable environment.”
That’s achieved by attending to details such as the temperature in the tasting room and the character of the staff.
“We hire genuine friendly people with a smile,” Oliver said, “and enrich them with wine knowledge.”
Again, reviews on Yelp attest to the winery’s success in this regard. Another review says, “Wonderful place to visit. The employees are extremely helpful and friendly!”
Oliver does attribute some of his winery’s success to location. “We just happen to be on the right road,” he said, “a four lane highway between Bloomington and Indianapolis.”
The winery has become an attraction for residents and visitors to the area. Oliver keeps customers returning to the winery by hosting a number of events every year, from concerts and picnics to a five-mile run to regular vineyard tours.
During the vineyard tours, visitors get to taste Oliver’s Creekbend line of wines, which are made with estate grapes. The tasting takes place in the field, right where the grapes are grown. Oliver likes to schedule the tours soon before harvest, when the grapes are ripe. He encourages customers to taste the fruit from the vine.
He tells them, “Eat all you want, you can’t come close to what the raccoons eat!”
Being able to connect the flavor of the ripe fruit with the location of the vines to the finished wine in the glass is an education for customers, Oliver said. “They say, ‘Wow, it starts right here.’”
The winery started as a basement hobby. Oliver’s father — also Bill Oliver — had started a vineyard and was producing more grapes than he needed for his home winemaking. So he lobbied the state legislature and soon Indiana passed a law permitting small wineries.
Oliver Winery opened in 1972. It is Indiana’s oldest winery.
Soon Oliver was buying grapes from other parts of the country. For some years in the 1980s they even stopped growing estate fruit.
But that changed in the early 1990s, when the winery decided to replant, this time with varieties that were best for their location in southern Indiana. Much of the plantings in their estate vineyards are hybrid, with many acres of Chardonel, Chambourcin and Vignoles. There is also Catawba and some vinifera vines. Currently there are 57 acres in production.
Much of Oliver’s production is from fruit grown out-of-state — in Michigan, California, New York, Washington and Oregon. This year the winery even bought Pinot Noir from Santa Maria in California.
“I don’t know if there’s going to be wine left for bottling, there’s been so much barrel sampling,” Oliver joked. “It’s got such soft, creamy fruit. It’s great.”
Getting the right fruit from out of state is “a lot of work,” Oliver said. “It starts with building relationships with good growers,” then involves paying attention to the details of transportation logistics.
Fruit is picked cool in the morning, packed with dry ice, then shipped to southern Indiana.
The winery has over 100 employees. Four work in the vineyard, seven make wine, while the rest are in administration, marketing, facilities maintenance, landscaping, and retail and hospitality.
Oliver recently opened a wine bar in downtown Bloomington, where it is emphasizing its Creekbend wines. Oliver Downtown, as the bar is known, has been a great success, exceeding expectations.
Currently Oliver wines are distributed in 22 states, with most of that in Indiana and 10 surrounding states.
In the meantime, this winery, now in its fifth decade, is seeing more and more competition from newer wineries. “The wine world has really changed in the last 10 years,” Oliver said.
What’s not bound to change, though, is the attention Oliver Winery gives to its customers.