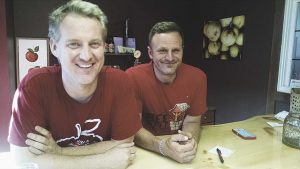 by Samantha Graves
Jeremy VanSice was fortunate that on the day he set off for a walk in deep contemplation about a direction for his life, he stumbled upon a lost artifact that would change everything. That artifact was a long-abandoned farm outbuilding located on some land owned by his in-laws. Cocooned within its four sturdy walls was something emblematic of the future of the four VanSice siblings. As it turns out, the small structure had once been a honey house and its contents included beekeeping equipment.
From that day forward, Jeremy changed his focus from a love of homebrewing and soda-making to meads. Today, four VanSice siblings, Jeremy, Chris, Paige and Parker, work together to run Bee Well Meadery outside of Bellaire, MI.
“Jeremy and Chris have been brewing for years,” explained sibling Paige VanSice. “Jeremy was making ginger ales and root beers for family functions, open houses, etc., when he ran across the old beekeeping equipment. A family friend showed Jeremy the apiary ropes, and when the bees were introduced, mead was a pretty natural next step.”
Bee Well Meadery officially opened in 2013 and within that year springboarded, thanks in part to a successful Kickstarter Campaign, into the thriving business it is in just three years. Today, they offer a variety of cherry, apple and hopped meads sold at more than 40 locations throughout Michigan.
Paige said the business dynamic changed significantly from a very small one-room operation to a full-scale meadery in just a few years with one large contract, “We signed with Imperial Beverage in January and moved into a new facility in time to start ramping up the batches.”
The new contract and increased production is not without a few growing pains. “We are over 5,000 gallons a year, which keeps us from selling mead and cider at farmers markets now; a bittersweet problem to have,” said Paige, adding, “We’re glad to be growing.”
The story of Bee Well Meadery is steeped in the context of place and history. Apart from the discovery of the old apiary on his in-laws property near Torch Lake, Jeremy is married to Stacey Sheneman, whose parents own and operate Torch Lake Cellars on the same land. There, VanSice tends apple trees when not busy bottling mead or cider. The “well” in Bee Well references the VanSice family patriarch who long ago sold bottled spring water near Clam Lake. And the double entendre behind the name is one that VanSice relates back to care of land and people.
“It goes without saying that supporting local farms is our responsibility,” said VanSice. “We thrive seeing family farms growing fruit to contribute to another family’s dream, and they love seeing the same. Michigan has some of the best apples and cherries in the country, and seeing local bees pollinating the trees where you’re getting your fruit – there is no better assurance that you are doing your part to support sustainable agriculture.”
VanSice brother, Chris, described the mead-making process as one unique to brewing, “Honey is low in nitrogen and adding nutrients is only usually done in high gravity beer. We had to determine what type of nutrients and when to use them, which was a bit tricky at first.”
Chris went on to say the yeast critical to fermentation is treated like royalty, “We give it everything it needs. It gets rehydrated at the right temp with GoFerm®. It stays at the right temperature; it gets nutrients at key points; it gets oxygenated early when it needs it and degassed later to remove CO2; fruit is added at the beginning and at the end to bring the fruit flavor forward.”
VanSice also said honey is heated just enough to get it to flow through the pump, but not enough to change the flavor profile of the honey. “We should have bought a honey pump much sooner than we did,” he added. “Buying supplemental honey by the barrel and using a honey pump is so much easier than trying to do things with buckets.”
The VanSice brother also advises other mead-makers “treat the yeast well.”
“There are several varieties of staggered nutrient additions. They all work well and save a lot of time,” he said. Staggered nutrient additions (SNAs) help stabilize fermentation by providing nutrients that might otherwise be deficient in the environment.
Feed the yeast what it needs and, Chris assures, “the mead will be better sooner.” He also stressed the importance of temperature requirements for yeast. “Pay attention to the yeast temperature requirements. Even within those temperature ranges flavor can vary from one end of the range to the other.”
The VanSice siblings are not afraid of the intricacies of the mead-making process. They consider it vital, “We are a family who is passionate about our process. We see our process from start to finish. We’re harvesting honey, we’re maintaining orchards, we’re picking and pressing our own apples, and using fruit that is local to Michigan, and in many cases, local to our own county.”
Part of that process is staying connected with customers, other farmers, and those within the greater community. “It keeps is what keeps us loving what we do. Staying hands-on and educated is a huge part of what we consider success.”
When asked about the specific meadery demographic, VanSice commented, “Man, we’re seeing it all. From younger folks wanting to try a hip, new craft beverage, to those who are following the gluten-free trend, regardless of age. It’s been really neat seeing cider and mead bridging so many gaps.”
VanSice said he sees no sign of the industry slowing in the coming years, making the mead business one sweet reward.