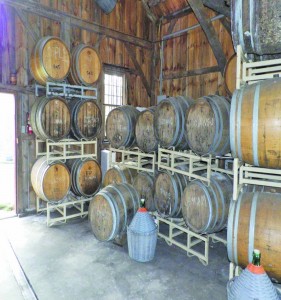 by George Looby
On Oct. 26, a brisk breeze blew over Westford Hill, home of Westford Hill Distillers in Ashford, CT as they hosted an open house event to support the activities of Slow Food.
The Slow Food movement was founded in Italy in 1986 by Carlos Petrini. The organization encourages people to enjoy cooking again and return to traditional meals cooked from scratch. Advocates encourage the consumption of locally grown produce which dovetails nicely with the programs now in place throughout the country supported by many State Departments of Agriculture. The economic, cultural and health benefits of such a program are evident, and its momentum continues to grow.
Slow Foods also has another goal — the strong hope that many consumers will come to realize the many benefits to be derived from homegrown and locally grown foods.

As the Slow Food movement has become global in scope, it has positioned itself to recognize other individuals and organizations who have contributed in some way to its stated goals. And so it was that the Westford Distillery came to be recognized.
Slow Food Shoreline, a local chapter of Slow Food, recently nominated the Distillery for international recognition for the process by which Westford Distillers produces their apple brandy. The process is included in the Ark of Taste Catalog, a publication that features foods meeting the criteria of the organization.
Apple brandy was a spirit of the very highest priority for some of our earliest colonists. Records suggest that it has been produced here in the colonies since 1630. Westford Distillers worked with Slow Food to produce true American aged apple brandy to protect the heritage of the spirit. Amanda Tripp, chapter leader of Slow Food Shoreline, stated, “Identifying and promoting endangered foods and production processes is central to the Slow Food Movement. Westford Hill Distillers exemplify Slow Food in their use of local products, employment of traditional practices and the production of a heritage spirit. We are excited to celebrate their inclusion in the Arc of Taste Catalog.”
The open house, hosted by owners Louis and Margaret Chatey donated, the proceeds to further the work of Slow Foods. Guests were given a tour of the facility in which the Chatey’s unique products are made. The product is produced from native fruits purchased from local orchardists. Lyman’s Orchards in Middlefield, CT is a major source for those products produced from apples and pears. At this time, the Chateys do not have a license to sell or dispense their product on the premises, but that goal is underway. The 200-acre farm on which the distillery is located has been in the Chatey family since 1919.
The basic principles of brandy production have remained unchanged since it was first produced, but the technology employed to produce a salable product has become increasingly sophisticated. To create their brandy, Westford Hills processes whole fruit through a hammermill and then ferments it in stainless steel fermentation tanks. At this time, special winemakers’ yeast is added to start the fermentation process. No additional sugars are added — the yeast feeds on the natural sugars present in the fruit. Pure fruit brandy is defined as having been distilled solely from pure fruit with no added alcohol, sugar or flavors. After two to three weeks, when all of the sugar has been fermented into alcohol, small batches are pumped into a custom made Holstein still imported from Germany. The distillation process is a relatively simple one. It takes advantage of the fact that alcohol has a lower boiling point than water. Thus, when heat is applied, the alcohol vaporizes before the water does, allowing it to condense and be captured for further processing. A 65-gallon run of mash yields from two to five gallons of distillate at 120 to 140 proof. The distillate from apples is aged in oak barrels previously used for white wine and aged for up to 10 years which allows for the enhancement of subtle flavor. Other brandys such as those made from pears and small fruits do not need long periods in which to age, and thus are typically stored in glass or stainless steel containers. After storage in such containers, these brandies are cut with distilled water to the appropriate proof level for the market, then filtered and bottled.
An interesting merchandising trick that Westhill developed was to grow a pear in a bottle. Enlisting the cooperation and talent of a young orchardist in Ledyard, CT, a pear was grown from the blossom stage to a fully developed fruit in a bottle. In recognition of this unique effort the distillery was awarded three Golds and a Silver for its products and package design at the Los Angeles International Wine and Spirits Competition in 2008.
Following the most informative tour of the distillery the group was taken on a tour of the farm, where attendees learned that next year, a field presently devoted to hay production will be planted to barley. This barley will form the base for yet another product to add to the line of spirits sold. Much local history was revealed during the mile long walk through the woods. Upon returning to the farmhouse, the original structure dating to the 1780s, guests were treated to a light buffet featuring home- produced spirits topping off a most enjoyable afternoon.