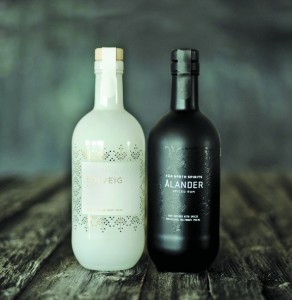 by Bill and Mary Weaver
Among the many important decisions a start-up craft distillery must make is choosing a bottle design that will stand out. Far North Spirits, located in Hallock, MN, is receiving more than local noteriety — its striking bottle design has caught the attention of New York distributor T. Edward Wine & Spirits. The company will begin distributing Far North Spirits’ products in New York and New Jersey in September.
“T. Edward found us on a design blog, and they liked our packaging,” recalls Cheri Reese, half of the husband and wife team that started Far North Spirits.
Intrigued, the distributor then checked out Far North Spirits’ website. “They thought we had three very important things,” Cheri continued, “story, authenticity and packaging.”
“Story is probably the most important. ‘What’s your story?’ is the first thing everyone asks. After reading about T. Edward’s take on the craft spirits industry, we felt like they might be a great fit for us. Our sales director flew out to New York in June and tasted our spirits with them. They were as impressed with what was in the bottle as they were with the design.”
Far North Spirits’ Solveig Gin and Ålander Spiced Rum are now part of the portfolios of T. Edward’s 20 New York/New Jersey area sales representatives.
“They are a great match for us,” Cheri continued. “They’re selective in what they promote and very values-driven. They also have strong feelings about what ‘craft’ means. We need to be able to trust our distributor to present our product in a way that is consistent with our values, and with T. Edward, we have that trust.”
Far North Spirits has room to grow while still meeting Minnesota’s definition of a micro distillery. Minnesota law specifies micro distillery sales must be less than 40,000 proof gallons, or about 46,000 six-pack cases. During 2014, its first year of production, Far North expects to produce about 3,600 six-pack cases. Cheri and husband, Michael Swanson, do not plan to exceed the micro distillery limit.
In Minnesota, Far North Spirits’ distribution is handled by Johnson Brothers, a family-owned company headquartered in St. Paul. The partnership has resulted in Far North’s availability in more than 250 outlets throughout Minnesota and North Dakota.
“Gin as a spirits category has a bigger market on the East Coast than in the Midwest, with a larger number of craft gins available on the coast. On the other hand, our spiced rum will kind of have its own stage in New York. There are only three other craft distilleries that we know of in the U.S. that use whole bean spices to make spiced rum, as we do.”
Far North Spirits’ packaging is the result of the priority given to branding in their business plan, drawn up by Michael. “We have a graphic designer with a lot of experience in packaging who has been with us from the start,” Cheri explained. “We were lucky to find her. She has done all our corporate identity, collateral, website and packaging, so everything is consistent and hangs together.”
Far North’s story is also quite intriguing. The operation is one of only fewer than 50 U.S. craft distillers, according to the American Distillery Institute’s research, that are field-to-glass — meaning they grow their own grain for distilling from seed and varieties they have chosen.
“T. Edward’s appreciates that as craft distillers, we are relentless about quality ingredients,” noted Cheri.
Far North’s distillery operation sits on a 1,500 acre farm started by Michael’s great-grandfather in 1917. After 20 years in jobs in marketing and public relations, Cheri and Michael planned their return home to the farm very carefully, to be sure they could make a profit. Not everyone has the land or the know-how to run a field-to-glass distilling operation, but Michael had both, in the rich soil of his  family farm and in his experiences growing up on the farm.
“He started driving a tractor when he was 11,” explained Cheri, “and has experience in all aspects of farming.” Last fall, they planted about 100 of their 1,500 acres in winter rye, and 10 acres in heirloom corn. The choice of a corn variety that will grow and mature in northwestern Minnesota, 20 miles from the Canadian border was not too difficult with help from University of Minnesota specialists who study corn varieties. Michael chose ‘Minnesota 13’, an heirloom corn used by bootleggers during Prohibition.
Finding a rye variety that resisted lodging during high winds and fierce storms and gave a pleasing flavor to the distilled product was a bit trickier. “Few people up here grow rye, and we’ve heard from distillers that some of the varieties out there are too peppery for a desirable whiskey,” explained Cheri. “But the ‘AC Hazlet’ rye seed that my husband found in Manitoba has a lovely vanilla note to it, and its yield in our first two seasons has exceeded our expectations.”
Customers have appreciated their Solveig Gin. It was named ‘Best New Minnesota-Made Booze’ for 2014 by the Star Tribune, Minnesota’s largest daily newspaper.
For their rum, Cheri and Michael were concerned about being able to source the needed cane sugar (federal law requires that rum be distilled from cane, not beet, sugar) from a co-op they could trust. Unexpectedly, they found that co-op at a family reunion, when they met a cousin of Michael’s, who grew sugar cane in Louisiana. “That’s where we buy our turbinado sugar. Our rum also contains demarara sugar, grown in Florida, which a lot of bartenders find very appealing.”
Their first batch of Roknar Rye Whiskey (the name means warrior of the gods in ancient Norse), made from rye and corn, should be ready to bottle in late 2015, after aging for about a year in new charred oak barrels from a cooperage in Minnesota.