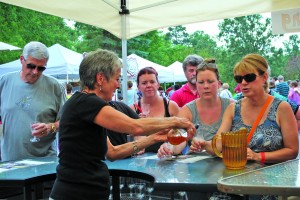 by Emily Enger
Attracting a crowd of 3,000 people over the course of two days may seem like a high goal, but Forestedge Winery accomplished it this summer at their art fair, held Aug. 16-17. In fact, they gather about that many people every year at the annual event.
The winery is co-owned by Paul and Sharon Shuster and John Wildmo. Before becoming winery owners, the Shusters were artisan production woodworkers, creating wood-based cooking utensils. That career took them across the country, where they traveled the art show circuit. When they decided to open Forestedge Winery, hosting an art fair themselves was a natural next step.
“We were the first in Minnesota to combine an art fair and a winery,” said Paul Shuster. And their show was a success from year one.
Because of his connections in the artisan world, Shuster is able to run Forestedge’s art fair as an ‘invitational only,’ and personally picks who he brings in. Even so, he maintains that advertising for vendors is still key. Forestedge advertises in local newspapers. They also have spots on T.V. and underwriting on public radio. “But the best advertising is always word of mouth,” he said.
High Standards
When choosing vendors, Shuster believes in being picky and focusing on high-end products. “You want high quality artists at your fair, not just crafters,” he said. There are multiple reason for this. First, you want to keep your vendors happy. Most artisans are adamant that, as Shuster explained, “Simply nailing two boards together isn’t art.” They want to be taken seriously and they want to sell their items at a venue that respects what they do.
The second reason to be picky is the type of customers you bring in. If you build up a reputation for being a truly artisan art fair, then the people who show up to your venue will be the serious spenders who support such high end products. Your vendors will be happy, but you will also benefit, as these are generally the types of people who are big wine purchasers.
“The goal is to attract people who are culturally aware of the higher essence of a product,” Shuster explained.
And that goal has made Forestedge Winery’s art fair a renown success. Some of this year’s vendors claimed this event to be their best sales ever. “And that’s coming from people who travel the country doing things like this,” said Shuster.
Those sales trickled over to sales for Forestedge, as well. Shuster didn’t have the exact number of bottles or crates they went through, but described the amount of wine sold as “unbelievable.”
Parking
Traffic flow for such a large amount of people can be an obstacle. Forestedge is designed for semi access, so it has plenty of space to fit cars. But that doesn’t stop traffic from getting chaotic.
Their art fair had multiple people directing traffic. Parking and admission was free but the entrance checkpoint is where indentification was checked. Anyone over 21 was given a wristband, which helped keep things clearer and more efficient at the wine testing tent.
Traffic was single lane only and Shuster discourages attempting two-lane traffic, which gets congested and confusing. The entrance and exit should be in separate places: go in one way and out the other.
“You’d think that would be obvious,” Shuster said. “But at some places, it’s really not.”
He also reminds anyone planning such an event to prepare for handicap accessibility and senior citizens.
The traffic component is pivotal. Guests can fully enjoy your event, but leaving your winery is the last thing they’ll remember. “If navigating traffic is too frustrating, everyone will be so mad, they won’t come back,” Shuster said.
Plan Long Term
It is doubtful that your first art fair will bring in 3,000 people. Shuster had a lot of experience and connections, even at the beginning, to help him grow their show. But the key is to continue.
“The longer you’re in business, the more exposure you get,” he said.
Many Forestedge customers have come to know them through wine associations they’re involved in. The art fair has become tradition; people think of it as the end of summer event hosted by their local winery.
And alcohol and artisanship is an apt pairing. “After all,” Shuster concluded, “winemaking is an art.”