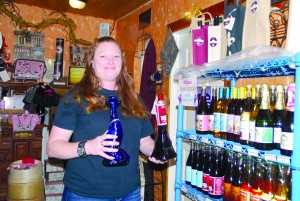 by Jane Primerano
It looks like a Tuscan Villa, but the name of the vineyards is Paris, after a nearby town and in keeping with a tendency to name things in French in central Tennessee. “They had kinda a French thing going,” Diana Gunderson said from behind the tasting bar. Gunderson’s parents, Ruggero (known as Roger) and Lisa Ciarrocchi, were refugees from Florida hurricanes when they flew over cornfields and woodlands west of Nashville and found the place they wanted to land. This was in 2005 and they first filled the land with cattle, pigs, ducks, geese and domestic animals and planted grapevines for personal use.

Starting with 5,500 vines, they now have 9,000 and produce 23 varieties of grapes on 12 of the 86 acres of the property. There were no buildings on the property they bought until they built a Venetian-style winery and restaurant. “We have people come in and talk about they days they hunted right here,” Gunderson said. She noted “this was supposed to be a hobby for their retirement.” Now her father is “winemaker, owner, etc.” Her mother handles the restaurant, which is for private parties of 12 or more for lunch or dinner, as well as off-site catering. “We do a lot of weddings,” Gunderson said. The catered events keep them busy, but they do participate in local events. Paris is home to what is billed as The World’s Biggest Fish Fry at the end of April each year. It features rodeos and carnivals and attracts tourists from all over. As a tribute, Paris Winery issues a fish-shaped wine bottle.
This melds well with the Eifel Tower-shaped bottle they also issue. Both are imported from Germany, Gunderson notes. With between three and five employees, depending on the season, the family does several jobs each. Gunderson bills herself as “caterer, chef, marketing and PR manager,” when she isn’t washing glasses behind the bar. She also designs the distinctive labels for the wine bottles. One label features a beagle wearing a University of Tennessee jersey. Butch was rescued from a shelter when the Ciarrocchis were planting their first vineyard. Butch was Winery Mascot, he greeted customers and could even open the door for himself. “He ate spaghetti by the strand,” Gunderson recalled. When Butch passed away, Roger Ciarrocchi dedicated his Moscato D’Paris to the dog. Other labels feature other family members, including Roger’s mother. “Grandma always made wine, from the Bronx to California,” Gunderson said. “People like wine labels,” she said, noting the winery provides custom labels for weddings, reunions and other events and parties.
They like the 26 varieties of Paris wines, too, including a peach wine and a blackberry that won an award in 2013. A dry white pinot is one of the most popular. Like many wineries, Paris features a special glass for tastings that is available for purchase. “Glass collecting is a thing,” Gunderson said.
Gunderson does a variety of marketing for the winery. She developed the website and handles social media, billboards out on Route 40, print ads and brochures. Events at the winery also help with marketing. Concerts, mostly blues, every few Saturdays, bring a local crowd as do a murder mystery dinner and pairing events, such as “wine and dine.” “We have reunions here,” Gunderson said, adding, “land remains in families for years around here. Local products are featured in the gift shop, including Hillbilly Moonshine and homemade mints and chocolates.
The website is www.pariswinery.com.