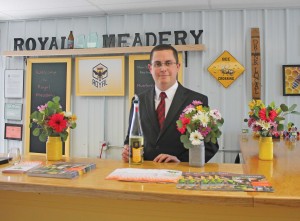 by Alex Huebner
For Gregory Wilhelm, opening a meadery was the perfect solution to a unique problem.“What do you do when you have too much honey? You make mead,” Wilhelm said.
But his path to opening up Royal Meadery and partnering with Start-Up NY, a grant program started by Governor Andrew Cuomo to draw more businesses to New York, was not so simple.
Six years ago, Wilhelm had the desire to open his own business. While working days as a designer for an engineering firm, Wilhelm devoted his free time to his two passion projects, craft brewing and beekeeping. He first started with the brewing, making small batches of craft beer from time to time.“I really liked making it for my friends and family,” he said.
As his passion grew, so did his interest in the ingredients he used for his beer. Wilhelm wanted to source his ingredients from as many local places as possible. Soon his craft hobby expanded into a mini farm of sorts and ignited a love for beekeeping
“I had bees, hops, blueberries, raspberries. I was trying to produce as many ingredients myself,” he said.“I got one hive and I was hooked.”
He eventually joined the BBA Weekend College Program at the State University of New York (SUNY) at Cobleskill, where he could learn all about planning and managing a business. Meanwhile, his side hobbies were growing. He was figuring out new ways to make craft beverages, and his small hive grew so large that it had to be split up and housed at two local organic farms. There was simply too much honey flowing for him to handle. Soon, an idea was born.
His classes allowed him the opportunity to create and hone his business plan for his meadery; using local suppliers as well as his own bees. Wilhelm’s hard work led him to winning first place in the Product/Services category at the Mohawk Valley Region Business Plan Competition in 2014. This win sent him onto the state competition, where he placed third and won a $1,500 prize.
He invested his prize winnings into getting the meadery off the ground. Through his college, he was able to become a candidate for Start-Up NY. They invested $225,000 into his idea, with him promising to create seven new jobs and internships for SUNY Cobleskill Students.
On June 20, 2015, Wilhelm was able to open his meadery in Richmondville, NY, a culmination of his passions and his business prowess. He currently offers three different varieties of mead for sale: New York Nectar, a semi-sweet mead; New York Nectar Ginger, a crisp and spiced variety; and Mumford’s Melomel, created with honey, blueberry, raspberries, black currants and blackberries. All three are available in 750 ml bottles, with a carbonated version of the New York Nectar Ginger being released in the coming months. Soon to be released flavors such as Cherry, Cranberry and The Queens, which is made of a blend of honeys sourced from local organic farms, are also available for sampling.
For the future, Wilhelm wants to venture into seasonal offerings, using flavors traditional to the fall season in upstate New York.
“We have a New York Apple Pie flavor coming, which is apple cider, honey, vanilla and cinnamon.” He continued, adding that he makes sure to ask himself “How can we highlight New York State Agriculture?” when conceptualizing new varieties.
Wilhelm makes sure not to let the stress of starting a business effect his creativity or his attitude. He is grateful to have the opportunities he has had and relishes coming in to work every day.
“I don’t think I’ve worked a day here,” Wilhelm said. “It’s been such a blast along the way.”