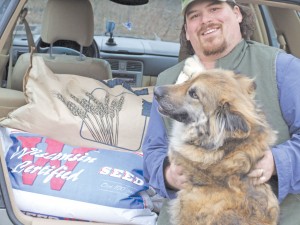 by Tamara Scully
“Our mission is to produce malt for Keystone breweries and distilleries using exclusively Pennsylvania-grown barley,” Adam Seitz, owner and maltster of Penns Mault, in Spring Mills, PA, said. “Basically, we want to be a puzzle piece in the Pennsylvania-grown, Pennsylvania-malted, Pennsylvania-brewed equation.”
For those skeptics, Seitz will refer to his biggest inspiration — a quote from William Penn. In 1685, in an attempt to attract more English settlers, Penn wrote that the territory of Pennsylvania was now able to “make mault, and mault drink begins to be common,” signaling that the area was well on its way to prosperity and longevity.
Three hundred thirty years later, Penns Mault is reviving the once-lost tradition of malting local barley. Soon, Pennsylvania’s craft breweries won’t have to purchase malting barley from out of state. The path to a truly local and sustainable beer, Seitz said, is to once again make malt in Pennsylvania.
“We started making malt over 300 years ago! Why not today?” Seitz asks. “We grow a lot of barley in Pennsylvania, but we grow it primarily as feed for dairies. Certainly, the malt produced 300 years ago was a different beast, but malt nonetheless.”
Malting barleys are barley varieties that have been bred specifically for that purpose. There are parameters that have to be met in order to accept the barley for malt production, including germinative capacity, protein content and mycotoxin contamination levels.
There are two types of malting barley: six-row and two-row. The rows refer to the arrangement of kernels, but the types have more important differences in protein and carbohydrate content, texture and taste. Barley varieties perform differently during the malting process, too. They can be fall or spring planted.
Seitz has contracts for about 40 acres of barley for planting this fall, which will be harvested next summer. The farmers have been eager to try growing malting barley, which offers them a chance to diversify rotations and add to their income streams, Seitz said. More difficult has been determining how much barley he needs to have grown in order to have what he needs. This past spring, Seitz had contracted for three acres of barley, but a very wet summer, and excessive disease pressures, rendered it unacceptable for malting. He hopes to have contracts with enough farmers to have 100 acres grown within the next two years.
Seitz is a certification specialist for Pennsylvania Certified Organic, certifying organic farmers and food processors throughout the Northeast. Penns Mault, however, is not exclusively looking for certified-organic barley. Instead, Seitz has developed his own principles of sustainability. Seitz, a 2010 graduate of Penn State University with a degree in food science and agronomy/agricultural science, has long been motivated by a desire to support a local, sustainable food system model.
“We only malt grains grown in Pennsylvania. This greatly limits the carbon footprint of our malts. We strive to provide our farmers with a fair price for their expertise and labors. We pay a substantial premium to our farmers. We maximize the use of renewable resources. The most energy-intensive step in malting is kilning the malt. As such, we plant to use wood to fire our kiln. One percent of our proceeds will be donated to Penns Valley Conservation Association.”
Once Seitz has malted the barley, he has to have a market willing to purchase it. He is optimistic that if Pennsylvania’s craft brewers become aware that locally-malted barley is available, they will be eager to make use of it. He has recently begun to promote his endeavors and generate brewer interest. Come next September, he’ll be malting the first barley harvest.
Seitz has purchased and obtained the necessary permits needed for converting a 6,000 square-foot structure into the Penns Mault facility. The malt house is presently being equipped with an array of repurposed processing equipment.
Seitz has designed and cobbled together an impressive system, capable of malting 225,000 lbs of malt per year. The actual malting vessel is crafted by repurposing a combined cheese vat/cheddaring table. An agitation device — critical for mixing germinating barley, which will become “an impenetrable mat of rootlet/culm entwined barley” if it is not agitated regularly — runs the entire length of the structure. The agitating ability of the equipment will save Seitz from the task of manually doing so several times per day, throughout the multiple-day process. This one piece of equipment can also handle all three steps of the malting process, increasing efficiency. The vat is set to be placed into the facility, by crane, early this fall.
“You name it, and I thought about how I could make it into a malting vessel,” Seitz said. Old dairy bulk tanks, rotary blanchers and other old equipment were all considered.
A seed cleaner, to clean the grain upon receipt, will also be used to separate the culms and rootlets after the malt is kilned. A repurposed peanut roaster will be used to make darker malts. Malt color is a visual reflection of the flavor, which is derived from the malt. It ranges from dark-roasted black or chocolate malts, to caramel or crystal malts, to lighter, clear malts.
Seitz realizes that in order to make his dream of malting Pennsylvania’s barley for its craft breweries to come true, reviving the forgotten art of malting barley involves convincing farmers and breweries to join him on the journey. It is one aspect of his plan which brings him great pleasure.
Penns Mault was recently awarded a USDA Local Food Promotion Program grant, to help establish the malt house and to help develop and promote the malting industry in Pennsylvania. Seitz will be holding open houses and Penns Mault will serve as a resource for farmers who wish to grow malting varieties of barley, and for those interested in becoming maltsters.