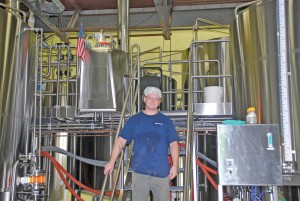 by Jane Primerano
Weyerbacher Brewing Company is a fixture in Easton, PA and their beers are a fixture in taprooms and package stores in 19 states.
Josh Lampe of SSMCreative, which handles marketing for Weyerbacher, said the brewery celebrated its 20th anniversary with a brew, called, appropriately — 20th Anniversary. It doesn’t always take a special occasion for Weyerbacher to introduce a new beer. The flagship of the brewery, Merry Monk’s, dates from the days when Dan and Sue Weirback started the business in a former livery stable in downtown Easton. “Great historic floors,” remembers Lampe, who worked for the brewery in those days, “but not for a forklift.” In addition, Weyerbacher operated a tavern in the downtown location.
The 2002 move to an industrial park on the outskirts of town created the opportunity for change, Lampe said. It gave them more room initially, and plenty of room to expand. A taproom graces the front of the new location, serving only Weyerbacher products and selling its merchandise. Lampe said the t-shirts commemorating each brew sell very well. Weyeberbacher offers growlers in two sizes that can be refilled and re-sealed. Pennsylvania law requires every alcohol container that leaves a licensed premises to be sealed.
In April, Pennsylvania law was clarified to allow pints to be sold out of a taproom with a craft license, Lampe said. He said most of the taproom customers are locals, but some drive three or four hours to sample Weyerbacher brews. Occasionally, tourists from the West Coast venture out to do the Pennsylvania Brewery Tour. “People come from states we aren’t in,” Lampe said.
Weyerbacher distributes as far west as Wisconsin, he said. “We slowly add states as we know we can supply them.” The taproom is open until 8 p.m. and Lampe said many people stop in and try a new brew then go into Easton for dinner. Most of the warehouse is taken up with the distilling equipment. Weyerbacher outgrew its 20 barrel brewhouse and replaced it with one twice the size. They are now trying to sell the old one to make room for more storage. The bigger brewhouse is also more efficient with less waste, so the yield is much higher.
Lampe said over the last seven years the popularity of craft beer has skyrocketed. Customers are people who have always enjoyed beer as well as those who a few years ago would have been sampling wine. “There’s as much complexity in beer as in wine,” he said. Weyerbacher’s sales staff does samplings in their territories every day, he added. Besides package stores, the beer is sold on tap in many places “from some great dive bars to four- and five-star restaurants,” Lampe said.
There is crossover from wine and spirit drinkers, Lampe noted. “And people do switch over from macro-beer that’s meant to be so cold you can’t taste it.” Merry Monk’s, a 9.3 percent beer, has done very well, but so have many others. Blithering Idiot is an 11.1 percent barley wine so named because after a couple the drinker turns into a blithering idiot. D’Tango Unchained is aged in bourbon barrels and is a very tasty brew, Lampe said. He credited brewmaster Chris Wilson for creating some good brews.
Weyerbacher is the original spelling of the Weirback family name, according to the brewery website. Dan Weirback started out as a home brewer. He was looking for a new business venture when he and his wife, Sue toured the Long Trail brewery in Vermont. Sue suggested they think about starting a similar venture. They began with some mainstream microbrews, but in 1997 introduced their first big beer, Raspberry Imperial Stout. The move created more room for brewing.
Weyerbacher is classified as a regional brewery because it produces more than 15,000 barrels a year, a figure it hit two years ago, Lampe said. Distribution is over the road, although the New Jersey distributor picks up his own merchandise.
Next year, Lampe promises a really big celebration for the brewery’s 21st birthday, “We’ll be legal,” he said.