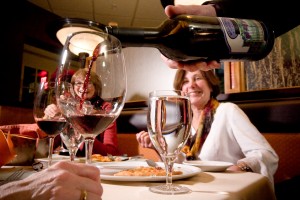 by Melissa Piper Nelson
Two Central Pennsylvania radio personalities recently opened their morning talk show debating whether the Commonwealth’s red wines could stand up to the those of other prominent U.S. wine regions. The battle of opinions raged on for several minutes until the subject took a turn and both personalities agreed that Pennsylvania’s white wines were quite good, too.

The red or white question aside, Pennsylvania’s wineries experienced a 35 percent jump in visitors over the last few years, and are estimated to contribute $2 billion to the state’s economy. All in all, it is a good indication that the industry is experiencing significant growth and acceptance as a recognized U.S. wine region.
A $200,000-plus marketing campaign, considered the state’s largest wine advertising venture to date, was launched last spring by the Pennsylvania Winery Association (PWA). With it, a new mobile marketing site, m.PennsylvaniaWine.com, embraces the state’s dynamically different wine producing regions and varietals. Says PWA’s Executive Director Jennifer Eckinger, “We adopted the tagline ‘keep tasting’ to remind visitors that Pennsylvania’s six wine regions are home to 200 wineries which produce dozens of different varietals-arguably more than any other state in the U.S.”
The campaign followed an industry economic impact study released in January 2013 and a six month strategic planning process. Unveiled at the January 2014 Pennsylvania Farm Show with targeting advertising begun last April, PWA’s marketing committee collaborated with SWELL, a Philadelphia-based creative agency and Matthew Vlahos Public Relations to brand Pennsylvania as a “vast and varied Wine Land.” The challenge is adapting marketing for six distinct geographical regions and twelve wine trails in the state. “It is an exciting challenge to have,” says Eckinger. Tying these points together, the campaign reminds visitors that no matter where they are in the state, they are never more than 45 minutes away from a winery.
As with many wine-producing states, Pennsylvania links the growing on-farm and small winery businesses with agritourism, and encourages local wineries to work with regional tourism organizations to promote wine trails as a destination experience. A state report on agritourism notes that visitors to Pennsylvania spend about $120 per person per visit, supporting economic growth and job creation in rural regions. Destination marketing links winery visits with local shopping, dining, recreation and lodging, expecting the estimated 900,000 annual winery visitors to spend even more dollars in local communities.
Between 1981 and 2011, Pennsylvania’s wine industry increased from 27 to 171 facilities. Eckinger sees that number increasing to more than 220 wineries in the near future. In the same period, the gallons of wine produced grew from over 181,000 to 1.12 million. Discussing the industry’s expansion, Eckinger says, “We definitely have seen increases in the number of wineries opening over the past two years and the willingness of larger commercial establishments to expand as well.”
Pennsylvania ranks 5th nationally in the amount of grapes produced, seventh in wine production and 7th in the number of licensed wineries. Eckinger points out that most Pennsylvania’s wineries are family-owned and operated providing a new venture for second or third generation young adults returning to the farm.
Part of the success of the new wineries is the regional festivals directly tied to Pennsylvania’s heritage and history. The festivals, representing many different ethnic and community celebrations, bring myriad visitors into the state each year. PWA uses the opportunity to promote the wineries found in each region along with special events and wine trail promotions.
Pennsylvania’s wine industry is quick to point out that William Penn, the state’s founding father, planted a vineyard in his new colony well over 300 years ago. And Philadelphia’s Fairmont Park was the site of one of the nation’s first commercial vineyards with backing from colonial entrepreneurs Aaron Burr, Johns Hopkins and Robert Morris. But in keeping with modern technology, m.PennsylvaniaWine.com, the industry’s mobile app, keeps new visitors up to minute on winery news, events, special programs and wine awards. Individual wineries are linked through the mobile site and through social media sites including Facebook and Twitter. In fact, more than 4,000 visitors made page visits to PA Wine sites during 2014 with 30,000 new out of state visitors frequenting the information as well. Eckinger predicts an even more robust mobile marketing place, increasing from the 58,000 new mobile visitors already identified in 2014. “Our strategy is to make the mobile site as nimble as possible with quick guides and important visitor information,” says Eckinger.
PWA represents more than 100 member wineries and works closely with the PA Department of Agriculture, the Pennsylvania Wine Marketing and Research Board, Pennsylvania Liquor Control Board, and various tourism agencies, to promote the state’s wines under the PA Preferred and other marketing programs. In 2011 total wine sales were at $43.7 million with the bulk of revenue coming from sales at individual wineries.  Pennsylvania wine makers can now sell product at farmers markets and through satellite locations. The majority of sales still take place, however, in winery tasting rooms and on-premise outlets.
With wine, grapes and related industries corralling more than 10,000 jobs in the state with a reported excess of $470 million in associated payroll, it is easy to see why the industry is keen to retain and expand its link to tourism. Visitors to the Keystone State are invited to visit the six geographical regions: Northeast, Northwest, Northcentral, Southeast, Southwest and Southcentral with wine trails that run through the Brandywine Valley, meander around the Pennsylvania Dutch Country, go up over the Laurel Highlands and across to the Lake Erie region with plenty of interesting geography in-between. Varietals include Cabernet Sauvignon and Catawba as well as Reislings and Vignoles, with as Eckinger says, “Something that fits nearly everyone’s taste preference.” This, according to Mark Chien, the state’s former extension viticulturist, is a great improvement over the state’s former identity as a producer of primarily sweet wines. Eckinger is pleased that more chefs and restaurants are featuring and promoting Pennsylvania wines and that national awards are flourishing for the state’s wine-makers.
The current marketing campaign will continue throughout the coming months, when PWA plans to link winery visits to health and wellness initiatives such as biking trails, organized runs and yoga in the vineyards.