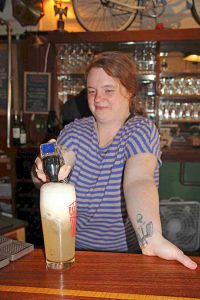 by Laura Rodley
The homemade ginger ale served at the People’s Pint and Brewery is too delicious to ever forget, and has been their trademark soda since People’s Pint opened. Co-owners, Alden Booth and Lissa Greenough, celebrated the business’s 20th anniversary on Jan. 1, 2017.
People’s Pint has become an iconic Greenfield, MA landmark, staying put on Federal Street while other restaurants come and go. “We serve good, wholesome food that’s affordable and consistent, have a great atmosphere…we’re a local hometown pub,” said Josh Breitner, general manager.
The concentrate of fresh ginger, spices, pineapple juice, lemon juice and sugar is made on site, stored in a keg, and ready to have soda water and ice added to it. The fresh ginger gives it a one-two punch. They go through a keg of ginger ale in a week.
They use a commercial extract for their root beer, served since the beginning. They go through a keg of that in a week, too. They go through a keg of their lemon-lime soda, made of lemon and lime juice and sugar, in about three weeks. At one point, they served raspberry soda.
“People like soda. They expect soda at restaurants. Instead of serving them Coke or Pepsi, we serve them homemade,” said Breitner.
“We wanted to use fresh ginger and local honey and not buy the high fructose corn syrup brands from a distributor; same with our root beer. We’ve always made our own sodas so as to avoid bottles and cans and a pushy distributor such as Pepsi or Coke,” said co-owner Booth.
“We make the soda in the basement, where we make our own bread.
On average, they serve 300 people a day. “It’s getting busier all the time. People come from a distance. People tell me, ‘we drove from Boston to check this out,’” he said.
“I really like the Root Beer. I’m not a big beer drinker, though I like the pilsner,” said Greenfield resident Frank Rozelle, a regular since People’s Pint opened. He has observed people tend to drink darker, more robust beer in winter, often with a higher alcohol content.
They have beers on tap year-round with varying percentages of alcohol. Their darker beers include Imperial Stout, which has 10 percent alcohol content, Slippery Slope — a strong ale brewed with cider, honey and ginger — has nine percent, and Day Dark Porter, with five percent.
Their Double IPA, with up to eight percent alcohol content, is “basically a really big IPA with more hops, more alcohol, more grain. It tends to have floral, citrusy hops…very aromatic,” said Booth.
They started out brewing in the basement on Federal Street with a seven-barrel brewing capacity and one fermenter. “It was crazy ridiculous,” recalled Booth. “We made one beer at a time, every five days. We never bottled at all.” But the customers kept coming back for more.
They have since expanded to a 15-barrel system and four fermenters over on Hope Street, making 1,200 barrels a year, plus bottling beer to sell locally. The head brewer is Chris Sellers.
People’s Pint is committed to using local produce, in season, for their salads, and the foods they serve. “We buy and use local vendors, local produce, local meat; we’re sustainable,” said Breitner. “We make sure to be conscious how we use our resources here, and buy from others that do the same.”
They pride themselves in producing very little waste, only one barrel of trash per night. Besides using cloth napkins, “We don’t automatically give out straws, or packets of throwaway ketchup,” said Booth. “Behind the scenes, we don’t have five things individually wrapped. We don’t use plastic wrap; we buy in cases. We don’t use aluminum foil at all; we use containers that get washed,” said Booth.
With so much to be grateful for, they pay it forward. For every Training Wheel Beer sale, they give 25 cents to MASSBIKE which promotes bike riding; a percentage of their Early Green Pale Ale supports the local farm Just Roots, and their beer Source to Seed benefits the Connecticut River Watershed Council which educates people about the Connecticut River.