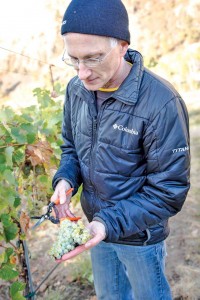 by Sally Colby
Traveling a different route than usual paid off for Idaho chemists-turned-winemakers Mike Pearson and Melissa Sanborn. “We were coming home and had taken a different route than usual,” Melissa recalls as she describes the couple’s start in the business in 2007. “There was a big for sale sign on a property. The place hadn’t been kept up, but we could see that the vines were still viable. We bought the old, abandoned vineyard and reestablished what was there.”
The existing vineyard was comprised of several varieties, including a four-acre block of whites that were planted in the mid-80s and a three-acre block of Bordeaux planted in the 90s; the first step was pruning the old vines to the ground and retraining the cordons. Melissa noted it took several years before those vines were productive.
Melissa and Mike looked at varietals that were already thriving in the region. “Our climate is fairly similar to areas in Washington State, so we looked at what would grow at some of the warmer sites in Washington,” said Melissa. “We knew we could ripen what they could ripen. We went heavy on Rhone and also planted quite a bit of Grenache and Mourvedre.” Today, Melissa and Mike are growing grapes on about 30 acres. Although the couple had been contracting Syrah from out of the area, they put in five acres of Syrah this spring as part of their effort to source as much fruit from their own vineyard as possible.
Melissa continues to watch varieties to help determine what might grow for them. “There are so many different soil profiles throughout the vineyard, so we’re trying a lot of different things,” she said. “A lot of it is getting to know your site and that takes a while. Tempranillo is doing well in southern Idaho, so we put in quite a bit of that. But I can’t force a grape to grow well here. For example, we get our Viognier from southern Idaho – the Snake River Valley – and put out a Viognier every year. We have some Viognier planted here, but I just don’t like it as well. It does better in southern Idaho.”
By 2009, the vineyard was full of thriving, productive vines. “We started small and produced 500 cases the first year,” said Melissa, “but we knew we wanted to get into making wine on a larger scale than carboys. It’s a different dynamic to make wine in barrels and tanks.”
While a combined background in chemistry is helpful when it comes to making wine, Melissa says the process involves more than chemistry. “To me, the biggest thing is having healthy wines,” she said. “We’re constantly using science to monitor yeast/sulfur levels, acids and tannins, but the ultimate wine is a result of taste – what we think tastes good. Having all that other knowledge to help maintain the wines is really important and that’s where we apply our education background.”
During her graduate research in wine chemistry and sensory science, Melissa compared the chemical composition of wine components to what humans perceived in taste tests. “It always came down to what the taster wants,” she said. “There’s important knowledge from science to apply to wine-making, but you can’t rely on just that information. It’s important to listen to your own intuition about how a wine tastes and what consumers want.”
With the help of another nearby winery, the Lewis Clark Valley will soon be approved as an AVA (American Viticulture Area). “We got a grant to hire a consultant (a soil scientist) to write the petition in collaboration with other experts in climatology and mapping,” said Melissa. “We started the process in 2009 and the petition was submitted in 2013 – it has taken almost three years.”
“The biggest thing is educating our tasting room staff on where grapes are coming from,” said Melissa, adding that they also explain why their two Chardonnays are different. “There’s a misconception that people just want to come in, taste, find what they like and leave. But they want to know where grapes are coming from and why we made the wine a certain way — and why one vintage is different from another with the same grapes from the same vineyard. It’s fun to watch them gobble up that information.”
Melissa believes that being a successful winemaker is a balance of making wine that both customers and the winemaker enjoy. At the annual Idaho Wine Commission meeting in February, growers and winery members enjoy a vintage tasting. “We bring in the previous year’s vintage and sample it,” said Melissa. “It’s fun to taste what ten different wineries are doing with grapes from one vineyard. The fun part about making wine, and what distinguishes one wine from another maker’s wine, is the winemaker’s personal touches. Someone might pick their grapes two or three weeks differently than I do, and that will make a completely different wine. Or it’s the oaks they used, or how long it’s oaked. It’s fascinating to taste what comes out of a vineyard in different hands.”
Melissa encourages guests to sample various wines and learn to distinguish the differences between wines made with grapes grown in different regions. “I think it’s important to not mislead customers,” she said. “A lot of people come in and don’t understand the difference between a vineyard and a winery. It’s fun to discuss how we like working with different growers in different regions. But our ultimate goal is to produce wines from grapes grown here in the Lewis Clark Valley.”