Pour a cold one for man’s best friend 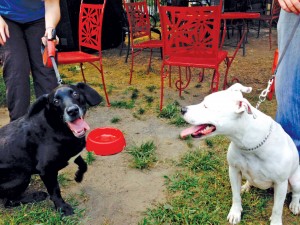 by Ellen Wren
Few things in life are better than sharing a beer with a buddy after a long day at work. But what if that buddy is your dog? Turns out, there are beers just for dogs on the market. Small breweries are beginning to get in on the dog lover market.
3 Busy Dogs is a Seattle-based company that began producing the first beer exclusively for canines. Creator Jenny Brown had made some pretzels as dog treats, which inspired her to investigate what it would take to brew a beer for dogs to enjoy with the pretzels. “People loved the idea from the start. I was afraid that it would be just a passing fad but it resonates with people who want to include their dogs in everything they do. Dogs loved it from the start too.” Brown says. The treat is devoid of hops, carbonation and alcohol, all of which are toxic to dogs.
Bowser Beer has been in production since 2008, initially sold in pet stores. “With the explosion of craft breweries and wineries, we pair nicely with them”, says Brown. The availability of Bowser Beer has grown and can now be found on menus at pubs, cafes and restaurants with open air seating where dog friends are welcome to join in the fun. “People often bring their dogs along and we provide the opportunity for them to enjoy a cocktail with their humans.”
Bowser Beer comes in two flavors:  Beefy Brown Ale and Cock-a-Doddle Brew. Porky Pug Porter will be available starting in October. All are made with real meat, malt barley and glucosamine for joint health. No artificial flavorings or colorings are used and all ingredients are sourced and made in the USA.
Brown also offers custom labels online. Customers can put their dog’s picture on a template and create a unique name. Brown shared, “We get some very creative brew names and hysterical dog pictures. I especially like the dogs who dress up for their picture.” Humans and dogs aren’t the only species who enjoy a cold beer now and then. “We had a little piglet that visited us every day at a festival. She loved Bowser Beer so much — I could hear her squealing as she spotted our booth. She wouldn’t stop until I poured her a bowl of it.” Brown tells. Cats enjoy the beer too.
Recently a new brew has entered the dog race. Flat 12 Bierwerks in Indianapolis, IN, which has been brewing human beer since 2010, began making Dog Brew for their own dogs as well as the pets of regular customers. They found it to be a hit. So in August of this year they began offering Dog Brew on tap for $1 a bowl at their two taprooms. The brew, which is also free of hops, carbonation and alcohol, is reported to taste a lot like broth. Ingredients are sourced from a neighboring artisan meatery and smokehouse, Smoking Goose, which donates bones and trimmings for the dog brew. Flat12 brewers use Smoking Goose stock blended with wort. The wort, containing simple sugars and trace amounts of protein, is then blended in a keg with the Smoking Goose broth. Brewer’s yeast is beneficial for dogs, and is added to the beer. It is edible for humans (and cats!) as well.
Beer for dogs is not just an American creation. Snuffle Dog Beer has been in production since 2009 and is now available at over 100 locations in 8 European countries. There is even wine made from grapes and catnip, exclusively for cats, available in Japan.
Bowser Beer donates to many rescue organizations and service dog organizations. They also provided their beer to hard working search and rescue dogs during the Oso mudslide disaster in Washington State in 2014. Flat 12 Bierworks donates all proceeds from their dog brew to dog rescue and adoption organizations in their region. Community connections and collaborations benefit all businesses. Thanks to these connections, Bowser Beer and Flat 12 Bierworks dog brew have received an overwhelmingly positive reception. Giving back to the community while expanding their customer base is a win-win situation.
Given the love and devotion people have for their pets, adding the novelty of a canine-friendly option to the taproom might not be a bad idea. It might just be the newest trend to take hold.