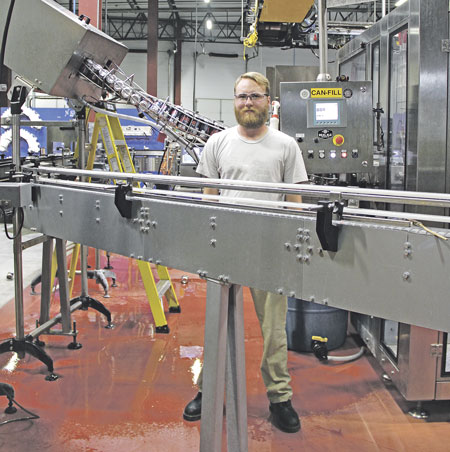 by Laura Rodley
Real Ale Brewing Company in Blanco, TX, currently brews around 60,000 barrels of beer a year. In early 2017, when the Brewers Association ranked the top 50 craft breweries in the U.S. by sales volume, Real Ale Brewing Co. made the list, coming in 49th.
They have been so successful that they are building a 120-barrel brew house expansion. They currently have a 60-barrel brew house, set on 24 acres. Started in 1996, Brad Farbstein and his wife Gabriel Gregerman bought the brewery in 1998. They are the second oldest craft beer brewery in Texas. (St. Arnold Brewing Co. in Houston is the oldest craft brewery in Texas, having shipped their first beer in 1994.)
Carrie Kokinda is Real Ale Brewing Co.’s marketing and events coordinator. She held up their signature black T-shirt, emblazoned “Unfiltered, Unpasteurized, Unavailable in 49 states.”
“As far as distribution goes, we sell our beer only in Texas. We have no plans to change that,” she said.
“We have a fairly old brew house. The system right now is not as efficient as the new one will be,” Kokinda said of the reasons for expansion. “We brew 24 hours a day to keep up with demand. It will bring everyone back into the daytime, and improve the quality of life for brewers who are working overnight.” They currently have approximately 30 fermenters and eight brite tanks.
“We are an hour out of San Antonio and Austin, but we have this little slice of Texas Hill Country heaven. People do make the drive,” she said. They brewed beer out of the basement of an antique store until 2007, when they purchased acreage just north of Blanco. The current spacious taproom with long wooden tables opened in 2015. Its back wall is enclosed in glass windows that overlook the packaging hall. On the other side of the wall is the catwalk, rather like the balcony on a ship, that overlooks the brewery. “Expansions just keep happening. Texans are very thirsty,” she said.
Among others, they serve Firemans #4 Blonde Ale, Devil’s Backbone Belgian Style Tripel, Pinsetter Amber Lager, Full Moon Rye IPA, Rio Blanco Pale Ale, Brewhouse Brown Ale and Sisyphus Barleywine Style Ale.
They distribute bottles, cans and kegs, using one distributor that takes their beer throughout Texas, from Corpus Christi to Amarillo. “Our beer is sold in most major liquor stores and grocery stores, not to mention bars and restaurants across the state,” said Kokinda.
The brewery’s owners incorporated the Texan spirit of taming the Old West. When the brewery was first being built, there were no city services that reached them, so they had to tame the land. In conjunction with the Texas Capital Fund, which supports rural business development, retention and expansion, they were able to run water and sewer lines out to the brewery.
Having the land connected to utilities on the site opened up opportunities for other businesses nearby that didn’t exist before. “We have really embraced being a part of such a small, tight-knit community. We do a lot of work with the Chamber of Commerce,” said Kokinda.
The weekend is typically the biggest draw for them, with a couple hundred people stopping by on a Saturday.
Kokinda said of Real Ale Brewing Co., “It’s an absolute family. Everyone is so kind and welcoming and friendly. It really is a family-run business. I love bringing my friends and family out to visit. You will sometimes even find me here hanging out when I’m not working. They stand by their mission. It’s a really great product.”
They have 58 employees, some who have worked for Real Ale Brewing Co. for 15 years.
In one room, the beer is stored in around 200 barrels marked with names like Brian, Bruce or Paul – that adds to the friendly appeal of the brewery, rather than numbers for their record keeping.
Other brewers often stop by and visit the brewery, sharing the camaraderie of creativity and success, and to have a brew.
For more information, visit www.realalebrewing.com.