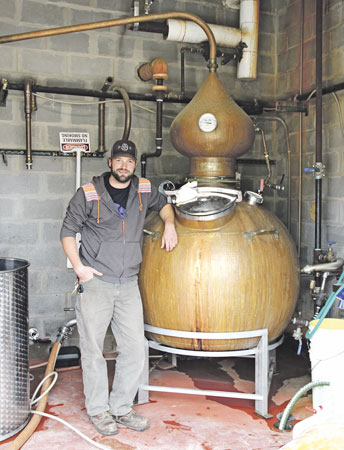 by Laura Rodley
Real Spirits Distillery Co. celebrated its first anniversary by releasing its first bottles of gin and whiskey to the public in April 2018. They were Texas Hill Country Signature Whiskey, Grain to Glass Gin and Single Barrel Whiskey.
Davin Topel is head distiller at the distillery in Blanco, TX, that is set on the grounds of Real Ale Brewing Co., their “parent” company, owned by Brad Farbstein and Gabriel Gregerman. It was in Real Ale Brewing Co.’s taproom that customers first consumed the whiskey and gin, which remains the only place where customers can have it in a cocktail or buy it by the bottle (and only two 750 ml liter bottles per month, per Texas law). It is not distributed
The mash is brewed in a copper, hand-hammered 1,100 liter (290 gallon) Hoga Still that was imported from Spain. “We ordered it from Spain and then we assembled it,” said Topel, who has been working at Real Spirits since March 2016.
Farbstein obtained a permit in 2014 and began distilling the gin and whiskey in 2015.
The malt whiskey is made from two signature beer styles made by Real Ale Brewing Co.: Devil’s Backbone Belgium Style Tripel and Real Heavy Scotch Ale, which is made with a peated barley, resulting in a light smoky flavor. The base beer for their gin is Real Ale Brewing Co.’s White Belgian Style Wheat Beer.
“The beer styles are made as they usually are, but no hops are added. It doesn’t translate very well after distillation so we leave it out,” he said. “The whiskey is made from 100 percent malted barley.”
It is barrel aged in 53-gallon new charred white oak barrels.
“Because of the Texas heat, we don’t have a set time for aging. Heat plays an integral role; it will make the whiskey age faster, so we don’t stick to the usual parameters of two to four years. I take it out when it is ready. Every two to three months, I will evaluate each barrel. When it is done, I harvest it. Each whiskey is fermented, distilled and aged separately. At the end of the aging process, I mingle the styles in different ratios in order to complement each others’ flavor. This mingling makes up the flavor of our signature whiskey,” said Topel.
The barrels are kept under lock and key in the rick house, where 68 barrels are currently aging. “It smells like a library of whiskey,” he said, like opening an old book amidst the aroma of wood and whiskey.
For more information, access the tab “Real Spirits Distillery” at realalebrewingcompany.com.