Resilient like its namesake, Olde Hickory Brewery continues to grow 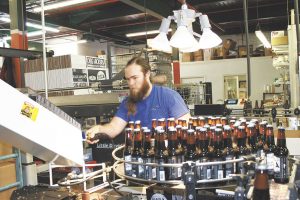 by Karl H. Kazaks
HICKORY, NC — Steven Lyerly is a veteran of the craft beer industry, having begun his career as a brewer in 1994 as a partner in a brewpub with a 7-barrel system constructed from converted dairy equipment.
He lived through the industry bust of the late 1990’s, as well as the downturn of 2008-2009, and has grown Olde Hickory into a brewery widely respected in the region and among craft beer connoisseurs.
In addition to the brewhouse, the business today includes three retail establishments in the Hickory area. With the recent addition of new fermenters in the brewhouse, Lyerly is poised to grow his market presence in North Carolina and Tennessee and to expand into South Carolina as well.
Olde Hickory’s brewery is located in an historic building in downtown Hickory. Built in the 1880’s, the structure originally served as a livery stable, before being converted to a general mercantile store in the 1920’s, then a cotton warehouse in the 1960’s.
When Lyerly took possession of the building in the late 1990’s, the building had no water or sewer service, and only a single 110-amp electrical service panel.
Today, it houses an array of brewing equipment, including three brite tanks and an array of 40-barrel fermenters.
“The low ceiling height,” Lyerly said, “is a limiting factor,” in determining the size of equipment the brewery can use.
Earlier this year, Olde Hickory installed a GEA Westfalia centrifuge. “There’s less beer loss,” as compared to filtering, Lyerly noted. “The centrifuge came in pieces,” he added. Representatives from the company were at Olde Hickory for three days, Lyerly said, “putting it together and training us how to use it.”
In recent years the brewery has also added mechanization to help with its growing package business. It has installed a case packer and a Little David CF-20T case erector, which Lyerly likes for its “small footprint, which is important, since space is a premium in this historic building.”
Olde Hickory has developed its package business in part due to the economic downturn of 2008 and 2009. Prior to that, the brewery was selling a lot of draft beer to its own pubs and other restaurants. When retail dining volume decreased during the recession, Lyerly focused on producing bottled beer.
“We had to sell something,” he said. The strategy was successful, with package sales taking off. As restaurant business has rebounded, today Olde Hickory’s production is roughly equally divided into draft and package.
Half of the brewery’s production is also devoted to lagers, with one of the brewery’s biggest sellers being its Ruby Lager, made from roasted barley, with a pleasant red color and nutty flavors complementing the beer’s malt character.
The brewery has an extensive aging and sour program, with a variety of creations being casked in old bourbon, Scotch and Armagnac barrels. “Time is a very important ingredient,” Lyerly said.
One of the brewery’s best-known aged beers is Event Horizon, an Imperial Stout measuring 8.5% abv and packaged in 22 ounce bombers. Last year the brewery made 2,500 cases of Event Horizon. This year, it will release 3,500 cases.
Lindley Park is another favorite from Olde Hickory’s aging program. Brewed with raspberries, it measures 10.0% abv. Then there’s Carolus Magnus, a 14.0% quadruppel which is brewed with figs, rosehips and raisins and then aged in Armagnac barrels. Its strength and complexity show great balance, while sparking the imagination of a time and place when monks would subsist solely on beers such as Carolus Magnus.
Olde Hickory is not just a great brewery, but also an important part of the regional economy and community. In addition to employing a dozen employees, eight employed in production and four in sales (plus its restaurant employees), the brewery helped spark a revitalization of downtown Hickory.
Its Olde Hickory Tap Room is located on Union Square in the heart of Hickory. When it opened, the Tap Room was one of only three businesses in downtown Hickory open after five o’clock. Today, the area is thriving.
The Union Square area across from the Tap Room even hosts the annual Carolina Championship of Beer Festival, with Olde Hickory being the site where BJCP judges rate hundreds of submitted beers.
Even though he doesn’t say so himself, it seems that as much as Lyerly treasures the awards his beers earn at such competitions, he values no less the significance of being part of a renaissance of something bigger, both in the beer community in general and in the Hickory region in particular.