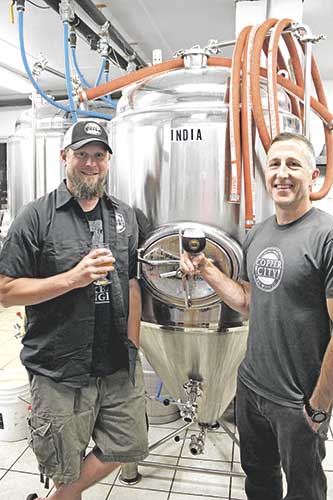 by Grey McAlister
The last brewery to call Rome, NY home was Fort Stanwix Brewing Company which closed before the 1940s. From that time, the Rome populace didn’t have a brewery to congregate at to enjoy handcrafted beer. Of course, that changed in late 2016.
The idea of Copper City Brewing Company started out like many other microbreweries — a garage brewing kit and a couple of friends. Danny Frieden and Eric Daniels both worked together for one of the oldest companies in Rome when they started to dabble in beer making. Soon, their wives and other friends would join in tasting the beer at gatherings.
It was then the two decided to work toward opening the first brewery to emerge in Rome for over 70 years. Many of their friends were on board but funds to purchase the equipment, licenses, glasses and other necessities were lacking.
After buying the building and acquiring the required licenses, the team started their own marketing immediately, although they were eight-months out from opening. They did it strictly by social media. They offered a community buy-in and raised $38,000, giving their supporters the benefit of receiving beer for free. The social media page also reached out to the rest of the community. “We started the page the day of the building’s close,” said Frieden. “We started eight months before opening. It built the excitement [for the community].”
The only downside to this method of marketing was that “[they] had to open on time.” Copper City had made a promise to open late November 2016 and they refused to push the date back. It was decided they would offer a quality and consistent product and thus they felt they must be consistent in their communications with their future patrons. It gave them a bit of pressure to get their recipes set and the building ready.
On Nov. 22, 2016 Copper City Brewing Company opened their doors. The building had been gutted and redone, with no expense spared and everything brand new. “We put in two air conditioners and two furnaces”, said Frieden. “We wanted people to feel comfortable” in any part of the tasting room.
The design of the tasting room was deliberate. It wraps around the bar so there is always space for a patron to find a corner to do business or socialize. Also, the room feels a lot bigger. The brewing equipment can be seen through a window from the tasting room giving customers a look into the brewing process.
“We have four fermenters, five barrels and two brite tanks. We produce about 300 gallons a week. The Woods Valley Witte is the only consistent beer we’re making right now. We’re getting another brite tank just for the Woods Valley,” said Frieden.
As the brewery is so new, the beers produced are put on rotation. However, the Woods Valley Witte became a fast favorite with patrons and the duo can’t seem to stop production of it without getting a bit of complaint from their customers.
In June 2017, Copper City Brewing Company was awarded the Chamber of Commerce Award for their efforts in reviving this industry in the city. “People bonded to this place so quickly!” said Friedman. Many patrons have donated or made items that can be seen displayed in the tasting room. One is an old wooden barrel that was used by the Fort Stanwix Brewing Company.
Friedman also says patrons who visit are not just locals. They come from all over and from many walks of life.
“We’re a part of the Heart of New York Beer and Wine Trail,” said Frieden. “It’s from Oneida County tourism.” This allows the brewery to be linked to others in the area, offering new and interesting places for wine and beer enthusiasts to visit in Upstate New York.
Much like many other microbreweries, “We don’t say anything bad about other breweries and wineries,” said Frieden. “There is no competition right now, so we are all helping each other.”
In terms of help, both Frieden, Daniels, their wives Lori and Erica, and seven of their eight employees all work full-time jobs outside of Copper City Brewing Company. Due to this, all the profit made from the company, besides the pay for the part-time employees, is put right back into the business. This has afforded Copper City Brewing Company to grow and stabilize quickly, although it makes for a busy schedule for the owners.
Since their opening, Copper City has sponsored a softball team, put out quality merchandise for branding and reached out as much as possible into the community. With the community embracing them, Frieden says the brewery is already running out of room. With the steady incline of business, Frieden said, “The five-year plan is to get bigger somehow, but right now we’re just catching up.” It is an uncomfortable position of being afraid of being too small but also anxious of growing too quickly.
Another troublesome situation is the license. Copper City Brewery is a farm brewery, meaning their product must be made with 20 percent of New York malts and hops. In 2019, the law jumps to 60 percent be from New York, which may be a challenge for Frieden and Daniels.
Of course, the main focus is their beer and the community. Frieden and Daniels work hard to create consistent brews which will please their clientele, open their palettes to new tastes and will turn out well.
As Daniels and Frieden are the primary brewmasters, Laurie Frieden has taken over the social media marketing. “We try to be present but not overbearing,” said Laurie. “I try to have posts that mean something.”
The entire team realizes a cool atmosphere can only go so far. Instead they strive for a friendly atmosphere, a consistent and great product and a unique experience.
“Rome needed this,” said Laurie.