Röbller Vineyard Winery keeps the focus on technique and terroir 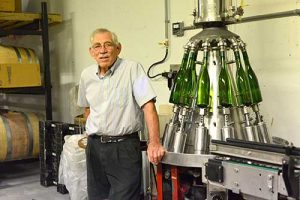 by Alex Huebner
Robert Mueller’s first venture into wine started in his garage.
“I made my first batch with my dad. We had a little two-door garage and people would walk by like ‘What the heck are they doing?’”
Despite the weird looks, and plenty of bad batches, Robert kept working, perfecting his techniques. He talked to everyone he could find about wine and ways to create better flavors and experiences.
“I visited a lot of wineries in California,” Mueller said. “I asked every question I could.”
The years of being inquisitive and traveling started to pay off. The feedback that Mueller would get from friends and family started to be more positive.
“I like to say that I knew I was getting better when the drain drank less that I did. And the drain drank a lot during those first few batches,” he added.
After 40 years of working in the tool and die industry in St. Louis, Mueller was ready to bring his hobby out of the garage and into the field. After looking around the state, Rob and his wife Lois settled on an 85-acre piece of farmland in New Haven, MO, a mile south of the Missouri river.
Mueller explained, “The first year was small, maybe 2,000 plants. We built ourselves up to about eight acres of grapes.”
Currently, the vineyard is home to 18 acres of grapes, mostly French hybrid varieties. Farmland surrounding the vines is kept as grassland to buffer the plants from any chemical exposure from modern farming practices.
The name for the Mueller’s new adventure would be Röbller, a mash-up of “Robert” and “Mueller,” with an umlaut added to reflect Robert’s German heritage. The winery first opened its doors in April of 1991. The goal was to become a European estate-style winery, with a focus on terroir and technique.
Röbller’s wine is made from French hybrid varieties like St. Vincent, Vidal, Vignoles, Norton, Traminette, Seyval and Chambourcin. As Robert experimented with growing different grapes on the land, he discovered that French hybrids could stand the harsh weather patterns of Missouri. Missouri summers in particular are notoriously hot and dry.
“One year, toward the end of August, we had over 100 degree weather for a week. The farm was growing green and by the middle of the week, it looked like November. But the vineyard hung on. They survived it,” Mueller explained.
This was all without a full irrigation system in place. The limestone deep within the farmland helps keep the ground moist even in drought conditions.
“I figured that with the shape of our land and the soil depth, if we could leave the roots to go after moisture, then we won’t have to irrigate,” explained Mueller. “We have drip irrigation, but we only use part of it. I’ve never done a total irrigation system. “
To make more room for production, the Muellers added a large concrete cellar to the existing production space in 1997. The in-ground cellar, complete with a large banquet hall on the ground floor, helps control the temperatures in the production area.
“The guys laying the rebar asked us what in the world were we building,” he explained, “It’s like a bomb shelter down here. So if you’re ever in New Haven and there’s a tornado, come on over.”
Once finished, the room became the main production area for the vineyard. From fermentation to bottling, everything is done in the basement.
“Most of our equipment are hand-me-downs. They used to live at other vineyards or farms,” Mueller said.
One such hand-me-down is a large dairy tank used for fermenting the wine.
“I used a similar tank when I was working in my garage,” said Mueller. The other main tank is newer, a stainless steel jacketed tank that holds 1,000 gallons.
The bottling machine is also one of those items. The vintage piece of equipment was built in Germany in 1962. The filling process is “semi-automatic” said Mueller. Finished wine sitting in the upstairs kitchen funnels down the machine in the basement. The machine sanitizes, fills, closes and labels the bottles.
Robert’s experience in the tool and die industry has come in handy with all of the older equipment.
“If anything breaks, I usually can figure it out on my own. I know a lot of these parts,” he said.
Wine production is still on the small side, around 5,000 gallons a year. Röbller joined the Hermann Wine Trail, and they remain one of the smaller stops on the trail.
“The bigger wineries around here are making 250,000 gallons,” Mueller said. “But we like staying small. We can focus on the technique and the practices more.”
Röbller Vineyard Winery celebrated its 25th anniversary in 2016 and the winery and its owners show no signs of slowing down.
“I retired 15 years ago from St. Louis,” said Mueller. “Now I only work seven days a week. It’s a nice break.”