Rosa Fiorelli Winery: A taste of Italy in the Florida sun 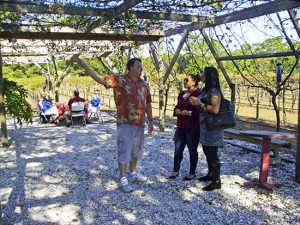 by Paul Burdziakowski
Bradenton, FL may be best known for the beautiful white sand beaches of Anna Maria Island but just a little further inland, hidden away in the countryside, is a small local winery which produces delicious wines crafted in the old Italian tradition.
The story of the Rosa Fiorelli Winery begins with an Italian couple named Antonio and Rosa Fiorelli who moved from Casteldaccia, Sicily to Miami in 1973. Italians are well known for living off the land and making wine and the Fiorelli’s were no different. They wanted to create something that represented their Italian culture in America. Antonio began his new life in the states as an entrepreneur, owning his own restaurant business from 1980 to 2000. More than three decades later, struck by the similarities to their native land, the couple purchased a rural 10 acre property just south of Lake Manatee in eastern Manatee County.
Antonio began cultivating this land with fruit bearing trees and a few grape vines. Soon there were five rows of grape vines in the backyard with the garden, and a corner of the garage was closed off for making wine. By the mid-1990s Antonio had filled most of his 10 acres with grape vines. In 1998 Antonio officially announced the opening of his winery, naming it after his beloved wife. He also stepped up his wine making by partnering up with the Florida Grape Growers Association and Florida A&M University. Grapes from the Fiorella’s vineyard are used to this day for research at Florida A&M Universities Center for Viticulture and Small Fruit Research.
Tragedy struck the Fiorelli family in late December of 2013 when Antonio succumbed to cancer at the age of 66. As the heart and soul of the business he was greatly missed by his family. Loyal customers were saddened by the news as well. Many of those who came in contact with Antonio found him to be a kind individual who was very passionate about his vineyard.
The Fiorelli’s ended up selling the winery to Erick Hall who is continuing the family’s wine making tradition. Hall says his interest in wine started in his youth when he saw his father making wines and jams from fruits and berries.
“I have been making wine and beer as a hobby for years,” Hall said. “I can remember as a child when we went out camping with my father. He would tell us to pick all the berries that we could find. My father would take them home and make wines and jams out of them. As I got older I tried the wines and came to appreciate how they were made. I want to see my own kids get involved in this business. There is a lot to do and learn in wine making.”
Since officially taking over as the new owner in October of 2015, Hall stays busy with every aspect of the business, including giving weekend tours to visitors. There are four different types of tours provided at the winery which range in price from $10 to $45 and require a reservation. There is the Standard Tour which begins with a wine tasting followed by a one hour guided tour which takes visitors around the vineyard and through the wine making facility. The rest are catered tours including a Cheese & Cracker Tour, an Italian Sub Lunch Tour and an Italian Buffet Dinner Tour. The catering takes place in what is perhaps the properties most unique setting — a pavilion area within the vineyard.
In addition to being a tour talking point and catering area, the pavilion is also the site of various themed wine and dine dinners which take place throughout the year. In April, for example, the Winery will be celebrating Easter with an Easter themed Wine & Dine in the Vines event that includes Sangria, a three hour open bar with three different wines, a five to six course dinner, dessert and coffee.
There are eight varieties of grape vines growing on the property. These varieties had been chosen for their sustainability in the humid subtropical climate of Florida. Among the varieties are Muscadines, which are native from south central to the southeastern United States and are known for their higher than normal antioxidant content. The remaining five varieties are hybrids that resemble California Vinifera’s.
Vines receive a regular supply of water and nutrients through irrigation pipes.
“We allow watering and fertilizing for approximately three months for hybrids and four months for Muscadines until about a month prior to harvest,” Hall said.
Hall noted a very important step in fruit development just prior to harvest. About a month prior to picking the water supply to the vines is cut off. This tends to allow for an increase in sugar production and a decrease in acid content of the grape.
The grapes are harvested in the summer, starting with the hybrids in late June into early July, Muscadines in early to late August. This spread of time allows the business to prepare the wines for each varietal in small batch sections.
Hall says that while the grapes are not organic, all the product is unfiltered making for a great tasting wine. It takes six months to a year for a batch of wine to be ready once it goes in the tank. An entire harvest produces about 12,000 bottles of wine. The winery produces five to seven different types of signature handcrafted Old World Wines annually including dry red, dry whites and various dessert wines.
“One hundred percent of our profits come from direct sales right now but I am open to marketing the wine to local businesses,” Hall said. “I would like to expand the operation to beer at some point and open up a little beer craft tasting area.”
For more information about the Rosa Fiorelli Winery visit their website at www.fiorelliwinery.com .