Rosemont Vineyards works toward “another 100 years” 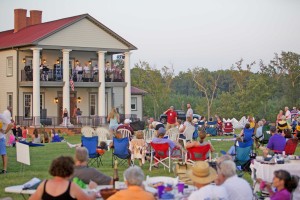 by Alex Huebner
The Rosemont Estate is a destination wrapped in history. The Rose family has been in possession of the estate since 1858, with parts of the land dating back as far as the mid-1700s. Everything from row crops to beef cattle has taken up space on the property throughout the years, with Rosemont always being operated by family members.
After thriving for more than 140 years, Stephen Rose decided to take the Rosemont Estate into a new direction. Grape vines were planted, new buildings were constructed and the wine began to flow on this picturesque southern property.
The idea for a winery was not an overnight idea. Before 2003, Stephen wasn’t very involved in the operations of the family farm. He had left for college and then joined the Dow Chemical Company, where he stayed for 30 years.
But the 30 years were as difficult as they were successful. Due to the nature of his position, Stephen and his wife Chandra were constantly relocating their growing family across five different states. “We were trying to find a balance. It was nice to have careers and everything. But we had dreams too,” Stephen explained, “Chandra said, come on home and let’s decide what to do with the rest of our lives.”
They wanted to come back to the farm, but not to be typical farmers. They also wanted to do something that would be profitable, not just different. “So we did a lot of research and saw that Virginia was starting to put an emphasis on growing grapes,” Stephen said.
That led to floating the idea of a winery through the local and regional markets, testing to see what the reception could be. While there were some skeptics — “People thought we were nuts for doing this,” said Stephen — they decided to bring Gray, Stephen’s older brother on board and get to growing.
So in 2003, 12 varieties of grapes were planted across 22 acres of the Rosemont Estate, a total of 32,000 vines.
“We didn’t put all our eggs in one basket or all our grapes in one bottle,” Stephen said, explaining why so many varieties of grapes were planted initially. “We wanted to see what would grow the best.”
In 2006, construction started on the winery. Wanting to blend their history with their new future, the Roses decided to use wood, tiling and stones from older, unused buildings around the property to build their new sites.
They chose to install a gravity-flow wine production facility underground. This system was picked because they felt that the grapes were least affected by outside force when traveling through the tubes. In addition, less grape pieces and parts make it through that could interfere with quality.
“We fell like this makes a better wine because we don’t have to pump all the skins and the seeds through, which can lead to bitterness in the wine,” Stephen explained.
By the time they released their first vintage in 2007, son Justin had become lead winemaker, incorporating yet another member of the Rose family into estate operations.
Family is a huge part of Rosemont. Justin’s wife Aubrey is in the Director of Sales and Marketing and multiple aunts, uncles and cousins help throughout the estate. The wide range of family and non-family members that help run the estate and vineyard are what really make the business great, according to Stephen.
“Working with family is very rewarding,” Stephen said. “We have such great people that work here.”
Putting family first lead to the creation of a daycare for all the employees, Chandra runs it, after she retired from full time vineyard work three years ago. Stephen is hoping that by having his two grandchildren familiar with the estate early, it could lead them to eventually run the place.
“Hopefully if they get into the business, they’ll be the seventh generation Rose to farm this land,” Stephen said. “Hopefully it’s an investment here that will lead us through another 100 years.”
The estate has become a destination for travelers from all around the nation. Stephen said that they receive more visitors from out of the state than in the state and they love the wide range of visitors who come through their doors.
“I always thought that working for Dow Chemical, a multinational company, I got to see the world. I thought I had seen all the diversity of thought and people,” Stephen said, “But then I don’t believe that, because they all come see us here.”