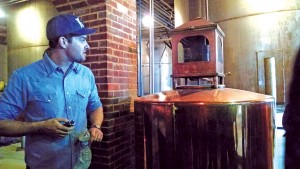 By Karen Binder
BARDSTOWN, KY — Some people claim rye is nothing but a weed, but others are enjoying it as whiskey. No matter what you call it, rye is coming back big. It’s no wonder that rye has been revived, considering the consuming public’s current interest in all things whiskey. It appears that distillers cannot make enough of it to keep up with demand. One of those distillers is David Pickerell, one of the nation’s top craft distillers and renowned whiskey consultant. Pickerell is also WhistlePig craft distillery’s head distiller and former Maker’s Mark head distiller; he’s also the great grandson of Kentucky whiskey pioneer Col. E. H. Taylor. American Distilling Institute Vice President Drew Faulkner calls Pickerell the “Johnny Appleseed of Craft Distilleries,” a title underlined by Pickerell’s prestigious Best of Show win at the recent San Francisco World Spirits Competition with his Old World Series Rye Sauternes Finish. “I love rye. Rye is my passion.”
Arousta rye is a “killer cover crop” because it chokes out weeds and contains a natural pesticide, Pickerell says. It grows to over 5 feet tall and has a small grain heads. USDA records indicate that US rye crop production hit a high of nearly 84 million bushels in 1918 and bottomed in 2007 at just over 6 million bushels. “The end of Prohibition killed rye, but there were a lot of sick people during Prohibition. So there was a certain guarantee of supply with the distillation holidays,” explains Pickerell. When Prohibition ended, rye producers did not come back a quickly as the Kentucky bourbon producers did with their anticipation of the new market. As a result, rye whiskey production had trickled down to only 1 or 2 days a year by 2006 at the major distilleries.
Two styles of rye whiskey are made in North America. Made from 100 percent rye is the Pennsylvania (Monongahela) style, which was developed by Pennsylvania distillers to take advantage of their most abundant grain. There’s also a Maryland-style with a 65 percent rye and 35 percent corn grain bill. Pickerell points out that the presence of corn is a reflection of Maryland’s access to its native grain, corn. He attributes the renewed rye whiskey interest on the 2001 relaunch of President George Washington’s distillery. Washington was selling 5,000 cases in 1799, a time when it is estimated there were about 10,000 distilleries nationwide. Pickerell helped develop the current distilling program there, including use of original equipment for mashing and distilling.
Dave Schlosser is the 23-year brewmaster at Naked Doe Brewery in Canandaigua, NY, and is getting into craft distilling. “I like rye and I’m planning on producing rye whiskey and vodka. Rye is certainly growing,” he says, “people are gaining more knowledge about craft spirits like rye, there’s a lot of room for growth.” Pickerell’s distillery, Whistle Pig, produced 22,000 cases of rye whiskey in its fourth year of sales. “I didn’t count on rye coming to explode in popularity,” he says. Pickerell encourages use of 100 percent rye with use of enzymes. “I really believe in the glory of rye.” He also recommends as a general rule not to rely on the natural diastolic power of malts for mashing, instead using known and predictable results of added enzymes.
The federal government’s Beverage Alcohol Manual defines rye whiskey as made from a mash of at least 51 percent rye. Grain bills also commonly use corn and malted barley. While it is distilled no higher than 160 proof, it’s barreled no higher than 125 proof in new, charred oak barrels. Like bourbon, it must age for a minimum of two years to be called “straight rye whiskey”.