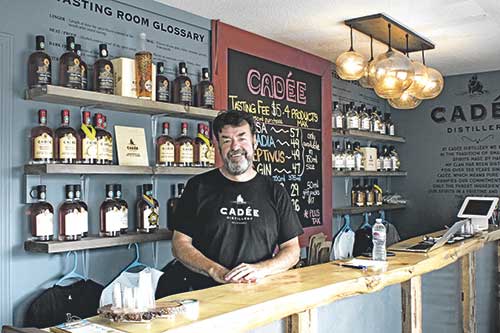 by Catie Joyce-Bulay
For distiller Colin Campbell it was all about location in deciding where to build Cadée Distillery. After looking at several locations, the Scottish-born Campbell went with a long-time family vacation spot, Whidbey Island — a 51-mile long island off the coast of Northern Washington and an hour’s travel time from Seattle, including a 30-minute ferry ride.
The latitude and topography are similar to Scotland, where Campbell’s family has been making whisky for the last 600 years. “The natural [landscape] allows us to create some very unique spirits here, because we’re located between the Olympic Mountains and Cascade Mountains,” said Campbell. “It creates a barometric drop, and that means the pressure squeezes our aging barrels so much so that we lose up to 20 percent through evaporation and absorption, which is a large amount of loss for any spirit.” Campbell says the benefit of such a large liquid loss is creating a more flavorful product without a need for tempering or adding any flavors or colors, since this squeezing naturally extracts them from the barrels.
Campbell is also very particular in the type of barrels his spirits are aged in. Cadée, which means pure in Gaelic, imports barrels from around the world — port barrels from Portugal, sherry barrels from Spain, and Madeira (a fortified wine) barrels from the Madeira Islands off the coast of Africa. “We source barrels with products that we think are stellar products,” Campbell said, adding that they prefer French oak. “The fun thing about French oak barrels is they really create a different flavor. People either like or they don’t, but we’ve found the French oak really creates a nice finishing softness to the product.”
The distillery, which opened in 2015, gained initial funding in a crowd-sourcing campaign through Indigogo. “Crowd funding is about creating noise and interest and we created local support and raised enough money to start the business and some of the basics.” He added that the initial funding came completely from people who lived on the island interested in supporting local business.
Campbell, who earned a certificate at the Institute of Brewing and Distilling in London, perfected his craft as a hobby while working as an aerospace engineer in the Middle East. Campbell then went back to the institute to brush up on skills and industry changes. “But frankly there wasn’t any changes,” he said. “This is a pretty traditional business.” A tradition that runs in his family, his son is a distiller at Grants Distillery in Scotland and a cousin works at another.
Cadée, located in the sea-level town of Clinton, houses a tasting room and barrel-aging room where they also fill, label and package bottles. Cadée currently partners with four other distilleries, using the original mash bill recipe they created on a five-gallon, then 26-gallon still. “Our product is shipped here as raw distillate and then aged in our barrels and blended, finished and bottled here,” he said. They have plans to open their own full-production facility on the island soon.
Cadée produce four whiskeys. Their rye whiskey is aged in new, charred American oak barrels a minimum of two years. Their Cascadia Rye Whiskey is first aged the same way, then double barrel finished in French oak casks, previously used for 20-year-old port. The bourbon whiskey goes through a similar aging process, and the Deceptivus Bourbon Whiskey label gets the same finishing in the port casks. They also make a vodka and three types of gin, one finished in the bourbon barrels. Their spirits have received 18 awards in six competitions across the country.
Campbell employees a group of tasters he calls his “spirit(ual) guides” to develop new products. One such product is Medusa, launching early next year. “Medusa is a whiskey specifically in the female market,” he said. “I have 10 spiritual advisors and they are people who have helped develop the flavor profile of this spirit that we believe is going to be a very successful product for us.”
“Women can detect more flavors in their spirits that men generally cannot,” he said. Campbell says women have more taste buds than men, so the taste of Medusa has been guided by their direction and finished in Madeira barrels.
Campbell and his five employees produce 12,000 cases a year that they distribute through Nobel Wine and Spirits in Washington, directly to the state in Oregon and Idaho and through Golden Wine and Spirits in California.