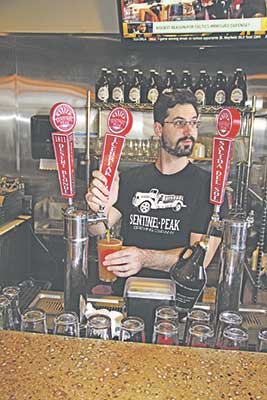 by Laura Rodley
Jeremy Hilderbrand has a lot to be thankful for this upcoming new year. The full-time captain/firefighter/paramedic of Golder Ranch Fire District also owns and works full time at the expanding Sentinel Peak Brewing Company, with engineer/firefighter Matt Gordon and paramedic/firefighter Tyler Carter. Their Tucson, AZ nanobrewery celebrated its fourth anniversary in January 2018.
Business has been exploding. So much so, that they are in the process of negotiating a lease on another space, more of a warehouse industrial system, near downtown. Currently, their existing brewing space at 4746 E. Grant Road is maxed out at 45 barrels a week. “This one will allow us to produce 150 barrels a week,” said Hilderbrand. They hope to have it up and running by next summer.
He was first introduced to German style beer while serving the U.S. Army, stationed in Germany from 1991 to 1993. He wanted to learn how to make it. When his wife presented him with a home beer making kit, he gave it a whirl.
“The one I really wanted to make was Munich Dunkel. I tried to make Munich Dunkel and ending up liking different styles. As I was brewing, the craft brew craze started. I was making it for myself and had a lot of extra that I took to picnics with other firefighters. They suggested I start a brewery.”
That was six years ago. At the time, he was the only one of the trio who knew how to brew beer. Gordon handled the building portion and now, the high-tech commercial kitchen. Carter handles the marketing and distribution.
Their first location didn’t work out, primarily due to zoning restrictions. So, they sought another. To help with a build-out of the new brewery in their East Grant Road location, they held a kick-starter in April 2013 and raised $37,000. He knew he could count on some of their fellow firefighters donating. “Amazingly, 230 different people donated, widespread, from all over Tucson,” said Hilderbrand.
People were ready to welcome a brewery as “there is no other brewery around for miles.”
Even so, their space was challenging. “It was completely unusable. To make it what it is today, it took a year. We did everything ourselves as we didn’t have money to pay anyone else to do it.” They expanded the original space a further 1,500 square feet to hold two brite tanks, four 400-gallon fermenters, a taproom and a restaurant with a breezy outdoor patio frequented by the lunch and dinner crowd.
Hilderbrand succeeded in making a Munich Dunkel style beer first inspired by his visits to Wurzburg, Germany called Dewpoint Dunkel, made with Tettnager and Crystal hops and imbued with hints of roasted chocolate. This beer won a gold medal at Nashville, TN’s 2012 Music City Brew Off. They also brew Icebreak IPA, with Columbus and Centennial hops producing the slightly bitter taste and floral aroma that IPA drinkers expect. Then there’s Salida del Sol Amber, made with Tettnager hops, that is a Mexican style Vienna beer. When a surge of German brewers immigrated to Mexico in the mid 19th century, they continued brewing their beer but used local ingredients and created a new flavor, called Mexican style Vienna beer.
They employ nine employees on the brewery side and 15 on the restaurant side. Three are full time, including their head brewer, Corey Hines who was taught his craft by Hilderbrand. Hines had studied as a mechanical engineer at University of Arizona, which segued perfectly into the intricacies of beer making.
They have much to celebrate. “We reached our 5-year goal in the first year. We’re about 10 years ahead of where we thought we’d be right now,” said Hilderbrand.
“We’re pretty unique. We’ve been really well received. We want people of all ages to have a place to hang out,” hence the need for a restaurant. They serve food, including barbecue and smoke meat almost daily. “Not many places in Tucson do it,” said Hilderbrand. The menu keeps evolving, but currently they smoke and serve ribs, brisket, chicken wings, pork and other meat that they put in sandwiches and nachos.
What advice does he have for someone wishing to start a new business? “If you are going to have partners, make sure it’s someone you completely trust because it’s a marriage between you and those people. In order to get a business to grow, you have to sit on the edge of your comfort zone. In the beginning stage, it was real hard to take some steps, out of our comfort zone. Now we’re are very comfortable being uncomfortable, out of our comfort zone. But at first, moving out of our comfort zone — expanding our location 1,500 square foot and signing on with a distributor — we weren’t quite ready for it.”
They distribute their beer throughout Arizona to stores and other restaurants through the family-owned Young’s Market Company. People can order growlers at the brewery, or simply enjoy themselves on the patio.
For more information, access www.sentinelpeakbrewing.com.