Shelburne vineyards an addition to the Shelburne tourism route 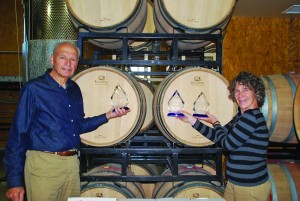 by Jane Primerano
The Shelburne Museum is a major tourist attraction for native Vermonters. Just down from the museum, on Route 7, there is another tourist attraction — a somewhat more recent addition.
Ken and Gail Albert came to Vermont as “flatlanders” for Ken’s IBM job. Ken always grew grapes in the backyard, but didn’t know if it was feasible to grow grapes for wine in Vermont until just before he retired. The couple drove to Quebec through the wine trail and realized the same could be done in Vermont. They started growing grapes for wine in 1998, and started making wine in 2001.
The Alberts plant on more than 20 acres in various locations. The winery on Route 7 includes four and a half acres of vines. They lease another three from Shelburne Farm, three more nearer Lake Champlain and another 10 acres in Charlotte.
There are eight varieties of Shelburne grapes. The Alberts buy more from other Vermont growers and from growers in the Finger Lakes region of New York.
“As our vines mature, we will buy less and less,” Gail Albert said. She pointed to the grape vines around the building. “Marquette wasn’t a grape grown in this area,” she noted. “The Marquette Reserve allowed us to build this building.”
The Marquette Reserve won best in the Cold Country Competition three years in a row.
The winery building is a rustic yet elegant space, with a balcony for parties and a terrace for nice days. The tasting bar is in the center of the main floor, near the door to the wine making facilities.
The Alberts employ two full-time employees in the vineyards — Winemaker Scott Prom, who is a partner in the vineyard, and Ethan Joseph, vineyard manager and assistant winemaker. Also on staff are Rhiannon Johnson, tasting room manager; Kara Weir, event planner; Steve Chick, who works in vineyard operations and winemaking; Lisa Arms who handles email marketing and the website; and Mary Mullican, who handles sale and outreach.
Like many wineries, Shelburne has regular events. Local musicians play on the first Thursday every month. Each November, the winery holds a traditional wine and food festival with local vendors, at which they offer free tastings and free specialty food samples. Each guest brings a donation for the local food pantries. Last year, they brought in 3,200 pounds of food. The festival also holds a raffle to benefit the food pantry.
Occasionally the Alberts pair with a local restaurant. They also open the winery for private occasions such as weddings, and provide their space for not-for-profit events.
Shelburne uses social media: Facebook, its own website and Twitter to advertise. They run print ads for special events, Gail said.
The winery is the site of quarterly art shows by local artists and holds an artists’ reception for each show.
Many of the winery’s events are based on the locavore movement, “because locavores move culinary tourism,” Gail said. They include a cheesemakers festival each year. This tends to bring a younger demographic than would normally come to a winery, she said.
Besides the Marquette Reserve, Shelburne produces a number of other popular wines. One specialty wine Shelburne has is Harvest Widows Revenge, a wine named by employees referencing their spouses who consider themselves “harvest widows.” Another is a vidal blanc “ice wine” which is made from grapes picked after they have been frozen on the vine.