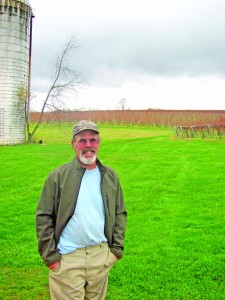 by Karl H. Kazaks
RAPHINE, VA — Shep Rouse has long been a pioneer in Virginia’s wine industry.
The owner (along with his wife Jane) and winemaker at Rockbridge Vineyard, Rouse has been making wine in Virginia since 1986, producing his own Virginia wines since 1992.
Inspired by German Eisweins, Rouse has been making a cryogenic ice wine since opening his winery — 20 vintages this year. Recent vintages have typically been an equal blend of Riesling, Vidal Blanc, Vignoles and Traminette.

Rouse was the first winemaker in Virginia to use screwcaps, beginning in 2004. He uses them on his white wines. He was also the first winemaker in the commonwealth to make wine from the Concord grape. Today he uses it to make two wines, both with four percent residual sugar — a monovarietal Concord and a blush, made with an equal part Vidal Blanc.
He has also been practicing lees filtration for about eight years. He uses a combination filter that has a plate and frame design and can be used for filtering wine as well as lees. When filtering lees, the plates use diatomaceous earth (DE) as the filtration medium.
With his machine, Rouse can process about 50 gallons of wine lees before the DE has to be replaced. When filtering juice lees (which have fewer solids because of the relative absence of yeast bodies) he can process about 100 gallons before refreshing the DE.
If you don’t change the DE frequently enough, the plates can become blocked and the lees being pumped into the machine can escape. Rouse has experienced that — seeing lees shoot up and coat the ceiling of the building he uses for the procedure.
Recently, Rouse filtered about 350 gallons of Concord lees and recovered about 160 gallons of juice. “It’s a lot of work,” he said.
Rouse, a Virginia native, first got interested in wine while living in Germany as a Fullbright Scholar. After a year of study abroad he remained in the country to participate in the 1977 harvest.
After returning to the U.S. he made his way to California, where he worked a couple of harvests at Veedercrest and Mark West before going to U.C. Davis, where he earned a master’s in enology. He then worked at Carneros Creek, Chateau St Jean, and Schramsberg before moving home to Virginia in 1986.
He made wine at a number of Virginia wineries, including Montdomaine and Oakencroft. In 1988 he and Jane found an old dairy farm in Rockbridge County and chose it as the place to start their own winery. The first vines they planted were Vidal Blanc.
The winery became licensed in 1992. The tasting room opened in 1993. Until 1999, Rouse continued working as winemaker for Oakencroft, taking all proceeds from his winery and putting them back into the business — building up inventory and purchasing equipment.
Today, Rouse grows 18 acres of grapes — Vidal Blanc, Riesling, Chambourcin, Pinot Noir, Traminette, Vignoles and De Chaunac. He buys Chardonnay, Cabernets Sauvignon and Franc, Concord, Norton and Syrah. This year he sold some Vidal Blanc.
His vineyard, at about 2,000 ft. in elevation, is too cold to grow the darker skinned red varieties. Petit Verdot, for example, “doesn’t get fully colored until Aug. 25,” Rouse said. He has two vines of that variety, planted as an experiment.
There have been times when Rouse considered planting more vines, particularly Riesling. But the challenges of this past wet and cool growing season made him rethink the challenges of working with more acreage.
With the wet summer this year, Rouse had to pay his pickers an extra amount to pick the rot-infected fruit.
At its peak in 2003, Rockbridge Vineyard was making 11,000 cases of wine. This year Rouse made 6,000 cases. Rouse has reduced his production for two reasons: the economic downturn and the proliferation of Virginia wineries.
Used to be, Rockbridge sold a lot of wine wholesale, particularly sweet wines. Today, there is too much competition for that, so Rouse has adjusted his strategy and sells primarily from the cellar door and at festivals.
Being familiar with the Mediterranean climate of California, Rouse is particularly attuned to the challenges of making wine in Virginia’s continental climate.
“You have to think outside the box,” he said. “The grapes ripen differently here because we have humidity and warm nights.”
During those warm nights, grapes respire, losing sugar. Thus, when it comes to harvest time and you’re looking at Brix levels to determine when to pick, your sugar-acid balance won’t be the same as it will be in a climate with cooler nights.
“Sugar is a guide but not the only guide,” Rouse said. “You can’t fixate on 22 degrees Brix. You have to look at the condition of the fruit and pH.” In Virginia, chaptalization is permitted, making it easier to base harvest decisions on factors other than sugar level.
Rouse also believes “things should reflect their origin to a degree.” He points to the use of malolactic (ML) fermentation as an example.
In Carneros, winemakers often need to put their Chardonnays through ML to reduce naturally high acidity. Virginia wines, thanks in part to the warmer weather during the days and nights of the growing season, often start with low acidities and don’t need to go through ML. So there’s no need to copy the Carneros style and produce a Chardonnay which has fully undergone ML.
What Rouse does is let about one tenth of his Chardonnay fruit go through ML, to flesh out the body of the wine and add a little roundness. In the other barrels he uses sulfite to inhibit ML.
Rouse enjoys making his V d’Or, which he compares to a Sauternes, having an alcohol level of about 13 percent and lower residual sugar than some sweet dessert wines.
He’s not the only one who enjoys the wine. The 2008 V d’Or has a communal score of 93 points on cellartracker, including a 91 point score from wine writer and critic Richard Jennings.