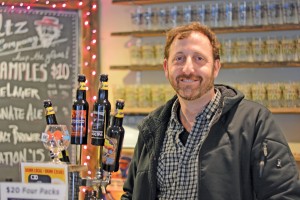 by Katie Navarra
Running a craft brewery wasn’t originally in Jeremy Cowan’s life plan. Raised in San Francisco, he attended Stanford University and earned a degree in English. While he’s not working as an English teacher or writer, he’s spent the last 19 years putting his creativity to use crafting recipes, creating marketing strategies and outlining distribution plans for “He’Brew-The Chosen Beer”, a craft beer beloved for its humor and unique flavor combinations as part of his company, Shmaltz Brewing.

“Jeremy often tells people that He’Brew really began as an inside joke among friends,” explained Shelby Schneider, Marketing Director at Shmaltz Brewing Company in Clifton Park, NY. The friends lamented that there were no Jewish breweries and if they founded a brewery of their own they’d use the tagline “don’t Pass Out, Passover.”
In 1996 the small group of friends brewed 100 cases and hand labeled each bottle. “I personally delivered each case with my grandmother’s Volvo,” he said. As the brand grew in popularity, he began focusing on the New York City metro market as a way to increase the company’s distribution.
In 2003, he moved production to Brooklyn to promote the beer to distributors and bars in the City. “We like to say we were born in San Francisco and raised in New York,” Schneider said. For the next decade he made regular trips to the upstate New York area. “I had been coming up here for a decade and decided it was a good time to consolidate production into our own place,” he said. Though he did not have previous experience operating a brewery of his own, he thought it would give him a greater degree of control over his diverse portfolio of beers.
Initially he pursued a site in Wilton, NY. When that property fell through, space at 6 Fairchild Square in Clifton Park, NY offered the ideal combination of location and space. He moved into the 20,000 square foot building in 2013 and is already planning to take over an additional 20,000 square feet of space to double production capacity this year. The 40,000 square foot brewing facility includes ample space for brewing, labeling, packaging and storing the beer as well as a 1,700 square foot tasting room open to the public.
Nearly 20 employees, including five brewers, work out of the facility. The brewery also offers internships to provide real world experience in multiple areas of business from event coordination, promotions, marketing and sales to specialty foods and craft beer.
Last year Shmaltz produced 14,100 barrels of beer. His goal is to continue moving towards full capacity, which is 40,000 barrels. “My goal for 2015 is to produce over 20,000 barrels,” he said.
In addition to the main line of brews, Shmaltz Brewing continually releases new beers like the Slingshot, an American Craft golden lager, with a citrusy hop aroma with hints of wheat and rye and was released in March. “I’m constantly thinking about the next beer we can brew,” he said. “He’brew started as a creative outlet and didn’t turn into a business until many years later,” Cowan concluded, “it’s pretty cool to be able to envision a plan for the future, work hard and see it turn into reality.” He’brew-The Chosen Beer is sold in 37 states through 40 wholesalers and more than 5,000 retailers.
For more information visit Shmaltzbrewing.com .