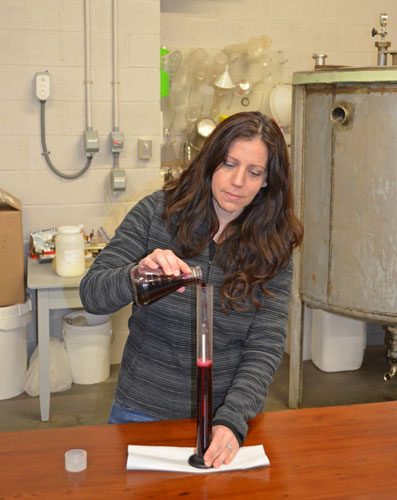 Although Jen Wampler isn’t in the vineyard during harvest, she receives samples prior to and during harvest. Her role is to be aware of the progression of the ripening process and when grapes will be ready for picking. Photo by Sally Colby

Jen Wampler had a successful career as manager of a medical practice, but knew it was time to do something different. Although she didn’t seek a particular career change, Wampler started making wine at home and became interested in the process.

With that, Wampler said doors started to open. “Someone told me that Harrisburg Area Community College [HACC] had a winemaking program,” she said. “They have a viticulture track and an enology track, and I chose enology because I prefer the winemaking aspect. I’ve been in the vineyard and have done some pruning, and I know what to look for in grapes, but my focus is after the grapes come in.”

As she juggled family life and a full-time job, Wampler took enology classes online and spent weekends in hands-on classes including chemistry and sensory evaluations. She graduated from the program in December 2015.

After Wampler left the administrative field, she quickly realized that skills she used there came in handy in winemaking, and found the entire process is a collaborative effort among everyone, from the vineyard to the winery to the tasting room.

To keep a winery on track with predicted production, the winemaker has to know the

end goal: how many gallons are needed. “I also have to remember if I’m adding sugar because that increases volume,” she said. “Every pound of sugar increases

the volume and I don’t need as much juice because the sugar adds volume.”

Although chemistry is an integral part of the winemaking process, Wampler doesn’t rely on science alone. “I’m not a chemist by any means,” she said. “There’s a balance between the winemaking process as far as having a natural feel, or organoleptic concept. The numbers can look great, but that doesn’t mean the wine tastes good, or maybe it isn’t exactly what we want. I look at the numbers, but I also look at taste, color to determine if it’s what we’re after. Sometimes the numbers don’t mean anything – they’re a guide.”

Every winemaker knows about the potential variations in grapes from one season to the next. Wampler said every year is different, with unpredictable weather and challenges that change acids and sugars in grapes. “You have to know how to compensate,” she said, adding she learned many of those techniques during her studies. “If it’s a high pH year, what should I do to bring it down, or if there isn’t enough sugar, what can I do to bring it a little bit closer to that sweet spot? If the pH is really high, there’s a risk of microbial issues down the road, so I address that in the beginning or during fermentation.”

Although Wampler isn’t in the vineyard during harvest, she receives samples prior to and during harvest. Her role is to be aware of the progression of the ripening process and when grapes will be ready for picking. “They bring me samples of what we think we’ll be picking,” she said. “I also do all the lab work. I look at the sugar and acid, and figure out whether or not the grapes are ready or need another week.”

During harvest, she devotes her time to setting set up tanks and preparing hopper bins and the press. She is present during harvest to oversee the pressing and moving of juice to where it needs to go. “Then I have to be ready to add the enzymes and start fermentation,” she said, adding that she monitors every aspect of the process while preparing for the next step – bottling. “There are so many different things going on throughout the year. It never gets old. When I’m tired of harvest and just want to sit down, harvest is over and I can do the paperwork and planning.”

Wampler said spending time in tasting rooms and talking with patrons is worthwhile to her as a winemaker. “I hear people say ‘It seems a little sweeter’ or ‘I liked it when it was drier.’ That’s valuable information to me, and I try to follow it from year to year.” Although she prefers dry wines, she realizes many people enjoy sweeter wines and is willing to make what people want to drink.

Although Wampler made a 180-degree career switch, she said her management and administrative skills meld well with her own creativity and desire to make good wine. After honing her craft at several Pennsylvania wineries, she is currently the assistant winemaker at Spring Gate Vineyard in Harrisburg, PA.

“There’s always something to learn,” said Wampler, adding that winemaking is hard work but worthwhile because there’s something to show for the effort. “It can be so simple, or it can be really complicated. I can throw yeast into some juice and it will do something, but will it be the best wine? I can be creative, and also use all those management and administrative skills. It’s a good fit for me.”