Siting the hopyard for success 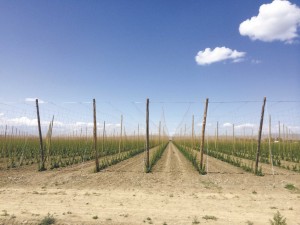 by Sally Colby
If you’re thinking about establishing a hopyard this spring and haven’t spent at least one full year planning, Cornell University hops specialist Steve Miller wants you to think again. Miller says that hops are a very expensive crop to establish and grow, so it’s important that potential growers spend time selecting and preparing a suitable site.
Miller says hops production in New York has increased 1,000 percent in the last four crop years, and that figure likely represents overall national growth of small-scale hops growers. Potential growers should think about hops in the same way as planning a vineyard or a high-density orchard. “This is long-term,” said Miller. “Use the best site available, and if you don’t have a good site, find a different one.”
The nation’s major hop production areas are Yakima Valley in Washington and the Willamette Valley in Oregon. “There are slight differences in climate in their growing area, and slight differences in soils, but they’re close,” said Miller. “In Pennsylvania and New York, we’re growing on dozens of soil types and in many micro and macro climates. It’s going to take a lot of work to develop information about what will happen on your farm, so record keeping is really important. Start keeping records about the fields and soils before you even plant.”
Miller explains what hops growers should strive for. “Hops are the female flower of a perennial plant,” he said. “There are male plants and female plants, and we just want female plants. They’re asexually propagated, just like grapes or apples. You can buy plants or rhizomes. The female plants have cones that develop in late summer, and you’re going to harvest between early August and late September, depending on varieties.”
The lupulin glands inside the hop plant are the source of alpha acids and essential oils, and those are the components that brewers are seeking for aroma and bittering. “You’re selling the chemistry that’s in each cone,” said Miller. “Every variety is different, and there are hundreds of oils in different varieties of hops. How you treat them makes all the difference in the world as to whether or not a brewer will want to buy them.”
Growers should spend at least one year preparing a site for establishing hops, and Miller stresses the importance of deep, well-drained soil. “The soil has to be at least four feet to bedrock because you’re putting in poles and trellis,” he said. “Poles are 50’ apart in the row and the rows are 14’ apart; and plants are three to three and one half feet apart in the row. There will be cables across the top to support strings that hang down for hops to grow up.” Hand-harvesting hops is extremely labor-intensive. It takes about an hour to handpick one hop plant, so Miller suggests that new growers consider how mechanization might fit into their operation from the start.
Hops require a site with full sun, and growers should plan for irrigation. “You don’t want to plant hops next to a hedgerow or a woods,” said Miller. “They need to have sun all day long because they have some disease problems that are influenced by high humidity. Hops need about six inches of water/month, so even with the amount of rainfall we get, we need to add more through irrigation. Irrigation also gives us an opportunity to add nutrients.” Hops growers should plan to use 4,000 gallons per acre for each irrigation event.
The pH for hops is 6.0 to 7.0, with an ideal pH of 6.8. Soil tests should be done the year prior to planting so that corrections can be made. Organic matter should be four percent or higher. “It’s difficult to increase organic matter even by one percent,” said Miller. “Hop roots are very aggressive, if there is more organic matter in the soil the roots will hold more moisture during dry periods in July and August.”
The ideal slope for hops is north/south, although not all hopyards can be established in this manner. “That isn’t always ideal as far as slope or wind direction,” said Miller. “We like to have rows running so that prevailing summer winds go down the rows rather than against the outside of the hopyard. The more airflow up and down the rows, the better they’ll dry out and the fewer disease issues.” Avoid low spots where moist air accumulates and fosters fungal diseases. Low spots are also susceptible to frost damage in spring.
A field that is fallow and potentially full of weeds and weed seeds should be planted in a cover crop the year prior to hop establishment. Suitable cover crops prior to planting include buckwheat or clover. Cover crops that will be established between the rows should be slow growing, and non-aggressive grasses like tall fescue or perennial ryegrass.
Miller wants hops growers to succeed, and suggests the Northeast Hop Alliance as a resource for information, rootstock and industry news (www.northeasthopalliance.org).
“The more hops we have growing in the northeast, the more we’ll be able to sell to brewers,” said Miller. “The amount of beer that’s being produced in the Northeast is huge, and we don’t have anywhere near enough hop acreage to produce even a small percentage of what brewers are using. It’s to everyone’s benefit to share information and do the best they can to improve the crop.”