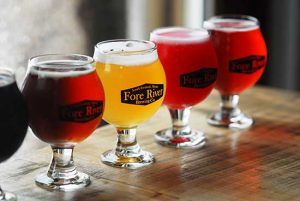 by Grey McAlister
John LeGassey and TJ Hansen, like many in Portland, Maine, love beer. The two started as hobbyists, but soon felt the need to branch out and open their own brewery. However, with a steady rise in the craft breweries in Portland, the market is a little more than daunting. But that didn’t turn the duo away, even after Portland was named one of the greatest craft brewery destinations in 2016.
Fore River Brewing Company opened its doors in 2015, being the first production brewery located in South Portland. The location is vastly different compared to other breweries in the city. The brewery is right in the middle of a residential neighborhood and has a 70 by 100-foot side yard which the owners allow residents to use as a park, complete with picnics and small events based on weather and season.
The brewery itself hosts other events year-round, such as a monthly yoga class open to any and all who would like to attend. It is quite popular, as the tasting room just moves the tables and chairs aside and participants can get a taste from the tap immediately after. Fore River is also an avid supporter of various non-profits in the area, hosting non-profit nights focused on a specific organization.
The majority of the sales comes from the 12,000 square-foot tasting room with six brews on tap. The owners made sure to have a friendly and inviting atmosphere.
“Brewery [environments] aren’t one of a local bar. This is a very orderly environment,” LeGassey said, a former marshal for the state of Maine before turning into a brewer.
With parents stopping in with their children to refill a growler and play some board games and others stopping by with their dogs, the brewery thrives on their safe and family friendly environment.
“Craft breweries around here do a good job creating an environment to build an understanding of creating a beer,” LeGassey said. The brewery and craft of beer isn’t one to be hidden away, like in the days of Prohibition, and it isn’t a party for binge drinking: the environment Fore River and many Portland Breweries have created is one of relaxation and comradery.
On a weekend, the brewery boasts “standing room only” with the number of patrons standing shoulder to shoulder. And plans are in the works for live entertainment and music performances. During the week, Fore River is a stop for touring groups and the brewers are available to answer any questions and show off their tasting room and brewhouse.
The tasting room is focused on their clientele, leaving plenty of space for their customers to spread out and enjoy the visit. To increase this, the taps are behind the wall and the bar takes up the least space but located in an easy to find location.
On tap, there are a variety of beverages to cater to many different tastes. Fore River is able to listen to their customers and provide beers which will best satisfy tastes. An example would be the Sour Raspberry being offered to those more accustomed to wine, making an alternative for the other alcoholic beverage. LeGassey said he is proud to be able to expand customers’ tastes in trying something they are not accustomed to and finding his product not only drinkable, but well liked.
The heart of the brewery — the brewhouse — is 430 square-feet and located right off of the tasting room. With such a narrow space, the orderly environment is even more critical. A place for everything and everything in its place is the perfect adage for the brewery.
Currently, Fore River is looking to expand their brewhouse and are in discussions with the city for permission. LeGassey said he wishes to add more space to increase the number of brews they produce. As they have tapped out the space in the brewhouse and they wish to stay where they are, the only option is the extend the building.
The brewery produced 25,000 gallons in 2016 using four fermenters, one lager tank, and one brite tank. The brewery will age many of their beers with barrel fermentation, storing the barrels in a loft just above their cooling room. These barrels aren’t allowed to sit for long, however, as space is valuable. At the present time, beers requiring long fermentations of months to years are not in the picture.
As with the use of the loft for their barrels, the brewery has also used the vertical space in the rest of the brewhouse. Not all the tanks are located on the ground floor. If the tank could fit and it was safe to do so, it was placed above other storage areas.
The hops used are from Willamette Valley, the South Pacific, or domestic Maine. LeGassey said the duo would like to use more locally grown hops, but the market is not quite set for Maine due to the propensity of the crop acquiring downy mildew and other diseases.
The styles focused at Fore River are closely related to Old English styles — especially stouts and reds. The brewery also plays with sours, using the Lactobacillus strain of yeast to produce sours which are consistent between each brew and created in a short period of time. Of course, being a New England brewery, it also delves into the world of IPA’s. The Fore River’s Double IPA was created to be refreshing with a good citrusy and created in a more traditional way.
“You need to develop an understanding of your chords and scales and perfect them before doing a solo,” LeGassey said in regards to the brewery developing their own completely unique beers. They are focusing on getting the fundamentals completely mastered and making quality classic beers before venturing out into experimentation.
For more information, visit www.foreriverbrewing.com .