Soaring ridge rises in Roanoke by growing roots in community 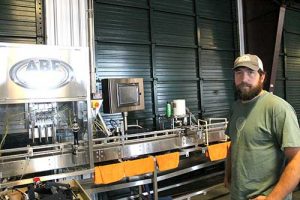 by Karl H. Kazaks
ROANOKE, VA — The taproom at Soaring Ridge Craft Brewers is normally closed on Mondays. But if you had happened to pass by one Monday this summer you would have seen several groups of people busily at work.
In each group were members of a nonprofit organization, working together to paint one of the taproom’s picnic tables. The idea was to paint a story about their nonprofit on the table, a story that taproom customers would be able to see when they sat down at the table and enjoyed a beer.
Unveiling the picnic tables would be a highlight of Soaring Ridge’s first ever Giving Day.
“Giving back to the community is a priority for us,” said the brewery’s General Manager Claire Ainsworth.
During Giving Day, the brewery’s customers were encouraged to vote for which picnic tables they liked, as well as provide donations to be awarded to the nonprofits.
The idea was to disburse the donated funds to the top two vote-getters, but the brewery raised enough donations to contribute to all of the nonprofits which participated.
That’s just one way Soaring Ridge has woven itself into the fabric of Roanoke’s community. It also hosts biweekly yoga classes organized by Roanoke’s Parks and Recreation, as well as pop-up Pure Barre classes. It has also supported a local food bank by encouraging customers to bring food donations to the brewery and by entering all participating customers in a raffle for concert tickets.
But of course the primary draw at Soaring Ridge is the beer, and that all goes back to the efforts of partner and brewer Sean Osborne.
Osborne, a native of the Roanoke Valley area, has been brewing commercially since 2008. He opened Soaring Ridge in the spring of 2014, making it downtown Roanoke’s first craft brewery.
The brewery’s production facility includes two 15-gallon fermenters as well as several 7.5-gallon fermenters. Current production is 1,800 barrels per year.
The brewery occupies a building, which formerly served as a distribution center for a bakery. Shaped like a shoebox, longer than it is wide, the building has a large elevated concrete platform running down its middle.
When it was a distribution point, baked goods would be delivered to the back of the building, offloaded via the central platform, then put onto delivery trucks, which came and went through the front side of the building.
Because the original purpose of the building required significant amounts of vehicular traffic, there are a series of overhead track doors on both the front and back side of the building.
Today, the original solid-metal doors on the front side of the building have been replaced with glass overhead track doors. When the doors are closed, an abundance of light comes into the building, and with all the glass passersby can see what’s going on inside.
But Osborne likes to keep the doors slid open as much as possible throughout the year. The result is a space open on one side, really connected to the community.
Today, the back part of the brewery, behind the elevated platform, serves as the production facility, with the fermenting equipment and cold room and canning line. There is space to add equipment as the brewery grows.
For example, their canning line is currently rated at 15 cans per minute. But with add-ons it can be grown to process up to 90 cans per minute.
The front side of the building and the elevated platform serve as the brewery’s taproom. Minimal partition walls and high ceilings help create a broad, spacious feel.
The brewery makes six flagship beers and a rotating assortment of specialty beers. The flagship beers, with names that evoke the hiking culture of the Appalacchian Trail as well as refer to local natural landmarks, include a kölsch, a white ale, a pale ale, an IPA, a nut brown ale and a porter. A recent new specialty release is the brewery’s first Belgian IPA, released at the beginning of December, Rebellious Monk. Another current specialty release is their dark lager, BoCo’s Finest (named after neighboring Botetourt County).
The brewery has a small barrel-aging program. One of the beers currently being aged is a vanilla version of their Trail Head Nut Brown Ale.
For the past couple of years, Osborne has been able to share brewing responsibilities with Duane Palmer. “He makes it easier,” Osborne said. “It’s nice to bounce ideas off of him, hear his ideas.” Together, the two are also experimenting with a broader range of malts.
The two are also working on a coffee IPA.
“It’s got to have the right balance of coffee and hops,” Palmer said.
It’s the creativity the team at Soaring Ridge puts into is drinkable creations that is the brewery’s greatest gift to its community.