Sold-out Eastern Winery Expo offers something for everyone 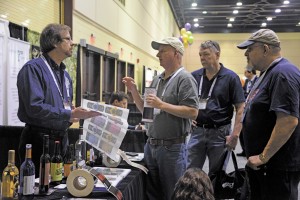 by Sally Colby
It was another successful year for the Eastern Winery Exposition (EWE), held March 8-10 in Lancaster, Pennsylvania. A new registration record was set with 1,067 attendees and sold-out trade show with 184 exhibitors and 230 booths.
Planning for this event begins far in advance of its March date, with the advisory committee working to ensure an interesting and educational program. Show manager Bob Mignarri and conference manager Richard Leahy work tirelessly to ensure a seamless program for all attendees.
The general conference offered sessions on enology, business and viticulture; each with speakers who offered valuable information on a variety of topics. Speakers were generous with their time and knowledge spending time answering attendees’ questions. Several sessions included wine tastings, which gave participants a unique opportunity to listen to the winemaker discuss the process, then sample the wines and learn how to detect subtle differences.
The blogging station, which was initiated at the 2014 EWE, was set up near the trade show floor and drew wines from about 30 wineries for wine bloggers and attendees to taste. Danny Klein, regional vice president of the American Wine Society and certified wine judge, describes one of the offerings from Mount Zion Orchard, located on the Eastern Shore of Maryland.
“It’s made from aronia berries, which are sort of like a red currant,” said Klein. “It also has a little cranberry, cherry and black currant. It’s very tart; more for mixing in a cocktail – like making a Cosmopolitan – or chilling it and drizzling it over vanilla ice cream.”
A Chambourcin from Virginia is one that Klein considered a good representative of its type, and he also liked a 2014 St. Croix rose` from Sharpe Hill Vineyard in Connecticut. “It’s one of the better version of St. Croix I’ve ever tasted,” said Klein. “It’s tough to make a good St. Croix without adding sugar to it. I like trying new things – new wineries, new blends.”
Steve Casscles, author of Grapes of the Hudson Valley, also enjoyed sampling wine with the bloggers. Well-known wine blogger Carlo DiVito, owner of Hudson-Chatham Winery in New York, was behind the keyboard.
After a full day of educational sessions on Wednesday, attendees spent time tasting wines prior to the annual industry celebration dinner. Following the dinner,
conference manager Richard Leahy introduced the Eastern Winery Expo 2016 Lifetime Achievement Award winner as Bill Oliver of Oliver Winery in Bloomington, IN.
Leahy explained that Oliver Winery is the outgrowth of work by a professor (William Oliver) who started making wine in his basement. He was instrumental developing the laws allowing farm wineries in Indiana. The Indiana Small Winery Act passed in 1971, and Oliver Winery opened to the public in 1972.
“The current owner and his wife took over operations in 1983,” said Leahy, “and oversaw the winery’s transformation from a curiosity to a major regional player; producing some 354,00 cases of wine and making the top two selling wines in Indiana and nearby Kentucky.”
Leahy noted that growing wine grapes in the Midwest can be challenging, but Oliver Winery has thrived and has seen a major increase in net profits. Today, Oliver sells wines in 15 states.
“They produce high quality wines to suit all palates,” said Leahy. “A complete customer enjoyment experience that makes the winery a regional attraction. The winery also gives back to the community in a number of charitable ways to show their commitment to place goes beyond their own vineyard. This winery is employee owned – the owners believe that the overall value of their company is created through extraordinary attention to detail in the way they engage their people, product and place. The value-based messages articulated by this engagement serves as a constant signpost to staff and customers about what’s important to the company.”
A lively scholarship auction brought funds for the scholarship program sponsored by The American Society for Enology and Viticulture-Eastern Section. The scholarship helps supports the education of enology and viticulture students, which in turn benefits the growing industry. Several past scholarship recipients were in attendance at the EWE as industry leaders and speakers.
The 2017 Eastern Winery Expo will be held March 22-24 in Syracuse, New York.