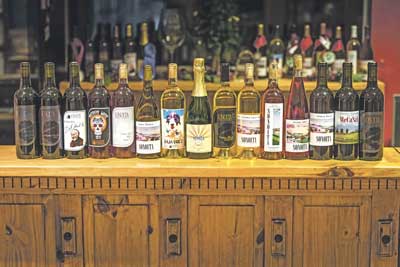 by Laura Rodley
Sonoita Vineyards is the oldest commercial vineyard and winery in Arizona. They have 60 fenced-in acres on their Elgin, AZ property, with 30 planted in grapes. The winery opened in 1983 and quickly gained recognition. In 1989, their Cabernet Sauvignon was chosen to serve at President Bush Sr.’s Inauguration Gala.
Their varietals include Mission, Merlot, Cabernet Sauvignon, Syrah, Petite Sirah, Sangiovese, Sauvignon Blanc, Pinot Noir, Malbec and Tannat.
Winemaker Lori Reynolds and her husband, Vineyard Manager Robi Reynolds, reside at the vineyard with their children.
It was Lori’s grandfather Dr. Gordon Dutt, a retired University of Arizona soil scientist, who proved the soil was suitable for wine grapes. In the early 70s, he conducted The Four Corners Grape Development Project to determine wine grape viability in a section of the four corner states — Arizona, New Mexico, Colorado and Utah.
“He planted the first vineyard here after prohibition and began the first commercial vineyard after prohibition,” said Reynolds. Before the government’s ban in 1915, wine grapes had been grown in Arizona, including some in the Verde Valley along the Verde River.
Dr. Dutt planted a series of test vines on the red acidic clay on the Babacomari Ranch, the oldest Spanish land grant in Arizona, owned by Blake Brophy. Abandoned, old gnarly Mission grapes had survived for decades at the ranch, untended. Why not try other grapes?
In 1978, Dr. Dutt purchased 115 acres of the Babacomari Ranch and started the Sonoita Vineyards in 1979. A few years earlier, in 1976, he had developed a crucial watering system that is still used today, building double duty berms on the hillside that harvest rainwater and reduce erosion. Sonoita Vineyards and Winery’s first vintage garnered 300 gallons and they opened in 1983.
Together, in 1984, Dutt and Brophy formed the Sonoita Appellation American Viticultural Area (AVA). Now the AVA consists of 14 other wineries.
Sonoita Vineyards held its first Blessing of Sonoita Vineyards Festival in 1978. Dr. Dutt’s friend, Father Greg Adolf, officiated at the first blessing and returns each year. He will return again as one of the officiating priests for their 40th anniversary on April 7, 2018. “He hasn’t changed much,” said Lori. “He always buys our wine — the Angel Wings Wine that we make — for his parish.”
The blessing is a huge affair. A group of priests and clergy, four to eight men and women, lead a big processional and throw holy water on the vines. The annual HarvestFest and Grape Stomp festival occurs the last weekend in July. The priests and clergy return to bless AVA’s new releases, one or two from each winery, during the annual St. Martin’s Sonoita AVA New Release Festival held on the second weekend each November.
Dr. Dutt is still involved in the winery, though not on a day-to-day basis. “Of course, he loves wine. That’s what made him 87 years old,” said Lori. He says the wine has helped preserve his good health.
“I was born here. In the 90s, there was not a whole lot of money yet in wine and my parents moved to Safford, AZ,” said Lori. She attended University of Arizona after graduating from a two-year college, got married and returned.
In 2012, when she considered going back to school, her grandfather declared that she was born to make wine and helped her to apply to and attend University of California, Davis online to study Viticulture and Enology. After graduating in 2014, she mentored for a year under vintner Kent Callaghan, owner of Callaghan Winery, also in Elgin.
Sonoita Vineyards and Winery produces roughly 2,000 to 3,500 cases of wine a year.
The vineyard is set on a hillside at an elevation of 5,000 above sea level. To the south rise the Huachuca Mountains and Canola Hills. To the east are the Santa Rita Mountains, and to the west are the Mustang Mountains. The dry climate is a deterrent to the phylloxera louse that can live in vines. The dryness deters most mildews and molds. If they do find powdery mildew, they treat it with an elemental sulphur compound that kills any mildew. Likewise, the high altitude’s cold winters discourages Pierces disease, which is a bacterium that gets into the vines and affects the water bearing abilities of the vine’s phloem.
Ever sustainably conscious, they compost wine byproducts of grape skins, stems and seeds for use as fertilizer in the vineyard. They recycle all cardboard and bottles.
Their 1,600-square foot tasting room can hold 165 people and is open daily, except for major holidays. Their high season is November to April, when snowbirds flock to settle in a warmer climate and taste the wine. Late November, tasters hailed from Montana to Virginia, Alberta and Quebec, and are tracked by customers sticking a pin on a world map hung in the tasting room to allocate their hometown. “We always ask customers to say where they are from,” said Lori. Foot traffic varies from 15 to 40 weekdays to 50 to 100 each weekend day. They sell to boutique stores and ship to some states.
Lori enjoys “not only watching our customers enjoy our wine. I love the harvest, I love getting the grapes in, tasting the grapes, keeping on my toes. If I need to change the acidity, I will pull the other yeast off the shelf and problem solve very fast. Each batch is different, especially for the red wine, depending on the grape varietal. Some yeasts can give a vegetal smelling wine.” She loves creating wines “based on what I want to convey, showcasing the grapes to our customer, showcasing our grape wine, our terroir.”
For more information, access www.sonoitavineyards.com.