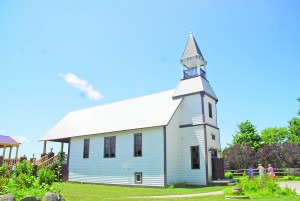 by Jane Primerano
Wineries in a modern cedar building or a former farmstand or an ancient stone barn have become commonplace. Less often seen is a winery in an old church. South River Vineyard features “before” and “after” photos of the church on its website. The “before” photos show a gloomy, abandoned building. Now, it is anything but gloomy.
At first, all Gene Sigel wanted to do was shoot some photos of the old Methodist Episcopal Church in Shalersville, Ohio. Sigel was just driving past and asked a neighbor if it was all right to take the pictures. She said he could do more than that, he could own the church if he could get it off the property. He did just that, dismantling it, and bringing it to Harpersfield.
Sigel left as much as he could of the 1892 building when he rebuilt: original pews, interior doors, wainscoting, flooring and some of the stained glass windows. He added a sign with a picture of a nun saying “You will go to h*** if you steal a wine glass.” Someone stole the sign. Another thing Sigel left was the atmosphere. He doesn’t provide entertainment in the old church, believing a quiet place to taste his wine is best for business and for his customers. He added a rear porch and then a pavilion. From the elevated porch, the view of the vines ends at a bright red building which is Red Eagle distillery. The distillery’s season is an off-time for grapes, Sigel explained. In addition, the area has plenty of rye and stone-ground corn for whiskey.
Once again, Sigel found an old building, this time a barn which he renovated into the first legal whiskey distillery in the area since Prohibition. The area, specifically South River Road, has a history of moonshine and stills, according to Red Eagle’s brochure. Sigel also makes vodka and brandy in the distillery, which has its own tasting room.
When Sigel bought the farm it was planted in 80 acres of Concord grapes. He pulled out the grapes and planted wine grapes. The Concords came out in 1999 and the wine grapes went in the ground in the spring of 2000, manager Tina Fowler said. “Everything we sell here, we grow here,” Sigel said.
Sigel still manages for other vintners. He talked about the wine business in northeast Ohio. “Nobody from New York is going to come here, but we get a lot of locals,” he said “Nobody used to come down this road, now it’s busy all the time,” he added.
His Riesling Reserve is the biggest seller, he said. A fruity and sweet wine with notes of peach and apricots, it is always popular.
Also popular are the ice wines, a Concord Ice Wine and a Blush Ice Wine. Many of South River wines, in keeping with the church theme, have Biblical names, like Exodus, a combined Merlot and Syrah. Others are Trinity, an off-dry bled on Cabernet Franc, Pinot Noir and Chamboursin with a soft and fruity taste. The sweeter wines include Creation, a slightly sweet white blend with a subtle apple finish, and Temptation, a sweet blush wine from Riesling and Cabernet Franc grapes tasting of strawberry and floral aromatics.
Dry white wines include a Chardonnay, a Dry Riesling, a Pinot Grigio and Semillon, a French varietal  that is “round and creamy with notes of honey and fig”. Dry reds include Cabernet Franc Rose, a European-style, a Pinot Noir, Karma, a complex blend of Cabernet and Merlot.
At the winery, Sigel also sells a select variety of beers from around the world that are sold in 750 ml bottles.
The winter of 2013/14 was a disaster for South River as for the other Ohio wineries. Normally sheltered from the worst of winder weather, despite its proximity to Lake Erie, the vines suffered a killing frost. “We went 18 years without a day below zero,” he said. “That winter we had minus 15-20.” He is optimistic that won’t happen again for a while.