Spirit of the bee 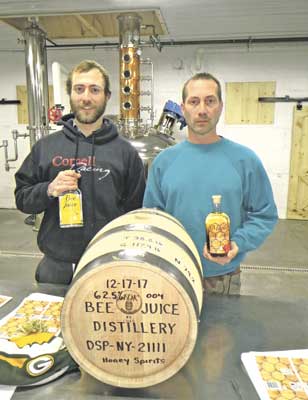 by Troy Bishopp
VERNON, NY — What started out as a boyhood hobby of tending to a few hives has led former auto body repair guru, Mike Rolewicz, into a much sweeter line of work. Three years ago, Rolewicz traded his paint gun and sanding blocks for a bee veil, smoker and 500 hives of reverent pollinators on his way to becoming an artisan honey craftsman. It’s a path that honors the spirit of the bee.
“I tend to like bees more than people,” said Rolewicz who brandishes his hard work as Michael B’s Honey Company. With the many hives spread over Oneida and Madison Counties, it’s a full-time job to manage queens, control pests, adjust to the weather conditions, build new colonies of summer and winter bees, harvest the 40,000 lbs. of honey, sell the sweet nectar at the farm and protect his workers in the winter.
The self-proclaimed workaholic relishes the challenge and diversity of tasks. His strength is his attention to detail and observational skills. “Bees are living the land and when you work with them you can pick up on their subtle signs of contentment and resentment. I’m reading the bee’s health and well-being every day,” said Rolewicz. It’s a skill honed by reading, talking with other experienced beekeepers and daily practice.
One would think Mike had enough to do managing bees, spending time with his very understanding wife Diane and restoring an occasional antique car at his garage. That was until a guy drove in, looking to buy a five-gallon bucket of honey. Curious at what seemed to be a random request, Mike pressed for an answer. “The guy says, ‘well I want to make honey-shine’. I thought, ‘huh, what the heck is that?’ As soon as he left with my honey, I searched honey-shine online. Apparently, it’s not very common which got me thinking about making a totally unique product right here in my community.”
Stung by the idea of creating spirits from his honey, Mike felt provoked to further his adventurous entrepreneurial side. “I made little batches of honey mead for three odd years and shared it with friends. Most would agree those early distillery experiments sucked,” said Rolewicz. That was until he bought his first 26-gallon stainless steel electric still.
Using two bays from his garage business, he started in earnest with mead recipes, distilling and tinkering with his honey/yeast-only spirit. These concoctions caught the attention of his son, Ben, who just so happened to have a mechanical engineering degree from Cornell University and was disenchanted at his job in Texas. “I felt like I wanted to do something on my own,” said the younger Rolewicz.
He left his job and embarked on a four-month cross-country road trip visiting distilleries and craft breweries, learning what he could about facility layouts, equipment, processing, logistics and marketing. He returned home 16 months ago to a new job in Central New York and to partner with his dad to get the business off the ground.
Mike laughed, “I really didn’t want him to go to jail so I said the only way we were going to do this for real is do it legally. First, we had to jack the roof back up and make new rafters in the garage. Benny used his Cornell University brains to figure out the correct angles to brace the roof. Once we got that done then it was on to the new steel ceiling and spray foam insulation. Then we jack-hammered the old floor and dug it down for a layer of sand and ran 1,100 foot of Pex tubing for radiant floor heating as well as fermenter cooling under the new concrete.”
They bought a new 300-gallon steam heated stainless steel and copper still to increase production from their five 330-gallon plastic tanks which holds and ages the fermenting mead.
Sounds easy enough until you realize to be legal, you must obtain federal, state, agricultural and markets, and county health permits as well as a liquor license. “There’s a ton of paperwork,” said Rolewicz. They are considered a class D farm distillery which has benefited from new state regulations and are currently processing one batch a month of 80 proof “Bee Juice” from their new facility.
When it comes to the final product, the pure honey spirit has a delectable smoothness. The maple Bee Juice highlights integrating the nationally recognized VVS-FFA chapter’s local maple syrup into the spirit.
For more information visit them at beejuicedistillery.com or contact Ben at 315.271.5832.