Stomping at the Pennsylvania Farm Show 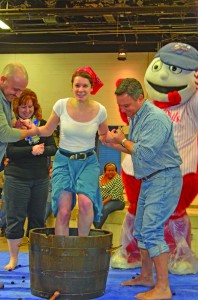 by Sally Colby
“Over 300 years ago, William Penn planted a vineyard in Philadelphia (now Fairmount Park),” said Jonathan Patrano, owner of Hauser Estate Winery in Adams County. “Now Pennsylvania is home to over 200 licensed wineries. It truly is wine land.”

Patrano explained that over the past year, the Pennsylvania Winery Association, in partnership with the Pennsylvania Wine Marketing and Research Board and the Pennsylvania Department of Agriculture, went through a rebranding process.
In recognition of Pennsylvania’s wine and grape industry, a celebrity grape stomp was held during the state’s Farm Show. The stomp, which pitted two teams of area celebrities, drew an enthusiastic crowd.
After the contestants stretched and worked out some kinks, they stepped onto the stage and the stomp began. Each team member had 45 seconds to stomp the grapes held in each of the two half-barrels.
Julia Hatmaker, entertainment reporter for the Pennsylvania Media Group, dressed as Lucy to recreate the well-known grape stomping scene from the ‘I Love Lucy’ series. The Reading Phillies’ mascot ‘Screwball’ was on hand to add his oversized feet to his team’s effort.
The first round results were so close that a stomp-off was held to determine the winner. In the end, official measurements taken by Pennsylvania Secretary of Agriculture George Greig determined that Screwball’s team won by just a small amount.