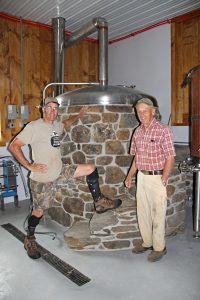 by Laura Rodley
Stone Cow Brewery in Barre, MA opened July 14, 2016 and served a thirsty crowd of eager attendees through the weekend. “We ended up selling 400 gallons,” said Phillip Stevens, Stone Cow owner. Did they sell out? “We were very, very close.”
The opening’s success exceeded all expectations. “It was totally insane,” said Stevens.
Brewery seekers found it easy to locate Stone Cow Brewery, a destination marked by a nearly 12-foot tall, 10,000 lb stone cow statue. “It’s the largest stone cow in the whole world,” said Stevens.
It’s all natural stone from the farm here and we assembled it. I scoured the farm for over a year to find the right stone.”
Applying Yankee thriftiness from the start, Stevens searched the market for the right brewery equipment at a reasonable price and located a brew kettle, a mash tun, hot liquor tank and four fermenters at an auction in Waltham “at a very good price.”
Eight stainless steel 14-barrel systems were ready early July. “Every time you brew a batch of beer, it’s 14 gallons,” he said. Four fermentation tanks each hold 14 barrels. With everything combined, they are equipped with a 5,000-gallon storage capacity.
He designed and had built a granite encasement for the brew kettle with graduated steps hewn from stone located on the farm. “It’s better than brick,” said Stevens. The two bars in the tasting room were also made from granite.
The Brewery is located on the family farm, a beautiful 1,000-acre dairy with an onsite farm store known as the Carter and Stevens Farm.        The Brewery is a family affair with Philip Stevens joined by wife, Erin; father Daniel, and the Stevens children.
Before they opened the brewery, Stevens and his family experimented with making beer on a homebrew scale testing out recipes prior to making large batches. Stevens’ daughter Molly is in charge of naming the beers, which include the Stone Cow Milk Stout and the Hay-bale Pale Ale.
By the first week of July, the brewery operated using power supplied by generator while they waited for hook-up to three-phase power from National Power. That hook-up occurred just three days prior to opening.
The Stevens hired six people outside of their immediate family to work in the brewery and are currently seeking more people to help, following their initial overwhelming success.
The picturesque 7,000 square foot brewery is a reconstructed 1830’s post and beam building with exposed beams, a very high ceiling, open floor plan and lots of tall windows overlooking the farm.
They planted 500 hop plants and 10 acres of barley to provide the grain for their beer. Working sustainably, as well as efficiently, they are using the farm’s wood to heat the beer during brewing.
The brewery is just one of the farm’s many diversifying measures. They have further diversified by selling hay and wood, continuing with the success of their farm-store, and by hosting the popular Spartan Races, an event boasting nearly 14,000 participants in June.
“We’re diversifying because the dairy business is absolutely horrible,” said Stevens, despite his Holstein herd production of 4,000 pounds of milk daily. “To produce milk and produce beer, it takes land,” he said, and he has that. “This is way better than selling milk.”
The brewery is open from 1 to 9 p.m. Thursday through Sunday, and closed the rest of the week so the family may dedicate time to their farm business.
Starting up a brewery takes a long time, and requires patience, which, as a farmer, Stevens has.
Obtaining their federal, state and local licenses, according to Stevens, “was a very long, drawn out process” that took over a year. By that time, all his neighbors and frequent farm visitors were hankering to savor a brew.
Stevens had already tasted the beer, and found it perfect. Apparently, so did his customers. The second weekend was just as successful. Stevens said, “It was unbelievable. Everyone was really raving about the beer.”